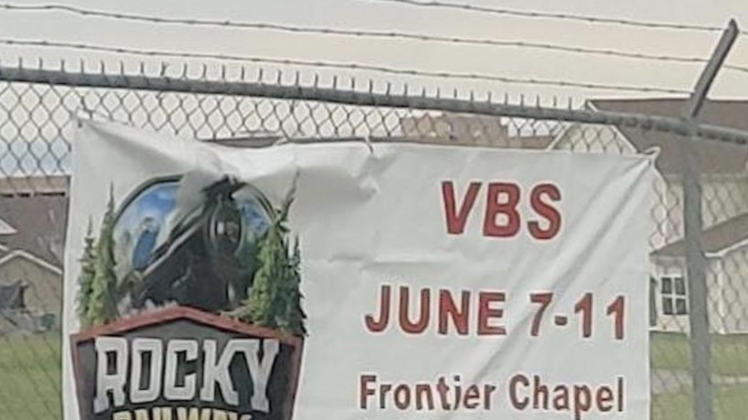 Vacation Bible School has been a beloved summer pastime for children across America for generations.

Boys and girls look forward to a week of Bible stories, interactive songs, arts and crafts and of course, Hydrox cookies and fruit punch. What’s not to love about VBS?

Honestly, the only people who could be remotely offended by Vacation Bible School would be a bunch of godless, heathen atheists.

And that brings me to an incident that occurred at Fort Sill in Oklahoma.

Military leaders ordered soldiers to remove a banner promoting Vacation Bible School at the base’s Frontier Chapel. The banner, which had been posted to a fence outside the main gate, declared, “Jesus Pulls Us Through.”

The banner had reportedly triggered individuals associated with the Military Religious Freedom Foundation, an organization known for waging campaigns against nativity scenes on military bases. Listen to Todd’s explosive interview with MRFF founder Mikey Weinstein above.

“I was astonished to see a banner with an explicitly Christian evangelistic message at the main gate,” wrote James Branum in a letter to the MRFF.

“The placement of this particular banner in such a public location sends an exclusionary message to not only non-religious servicemembers, but also religious servicemembers who are not evangelical Christians,” wrote Branum, who identified himself as a “Jewish Humanist” who believes in the “essential wall of separation between church and state.”

The MRFF claims to count hundreds of evangelical Christians in their organization. That’s what they claim. But I’ll be honest, I don’t know of a single God-loving Evangelical who would object to Vacation Bible School. Not even a Methodist or Presbyterian.

“This kind of messaging, particularly in this location, makes it appear that the US Army is endorsing an evangelical Christian VBS event, in ways that events for people of other faiths (and no faiths) are not promoted,” the aggrieved MRFF representative Sarah Kline wrote in a letter to Fort Sill’s commander.

Or maybe, just maybe other religious organizations aren’t hosting a summertime activity for children on the base? Maybe they couldn’t find enough kids to hold Vacation Koran School. Or Vacation Atheist School?

Could you imagine the joyless bunch in charge of Vacation Atheist School — kids having to sit around and talk about nothing all week while snacking on kale chips and wheatgrass.

“After legal review, I have determined that there is concern with the signage and as a result the signs will be removed today,” the commander wrote in a letter to Ms. Kline.

Col. Taylor did not explain what was concerning about the sign or how many signs may have been removed from Fort Sill. What a terribly sad thing to do.

So what does the law say about Vacation Bible School banners on military bases?

First Liberty Institute’s Michael Berry said it’s perfectly legal for the Department of Defense to allow VBS to meet on military installations and for the organizations who sponsor VBS to promote VBS.

“The DOD itself cannot ‘promote’ VBS, but it can certainly allow the sponsoring organization to do so as long as that organization follows whatever rules and procedures are in place for doing so,” Berry told The Todd Starnes Show. “Usually, there is a common area that is designated for organizations to do so.”

The banner may have been taken down, but children will still be allowed to gather for Vacation Bible School — in spite of the nefarious efforts of the Military Religious Freedom Foundation and their minions.