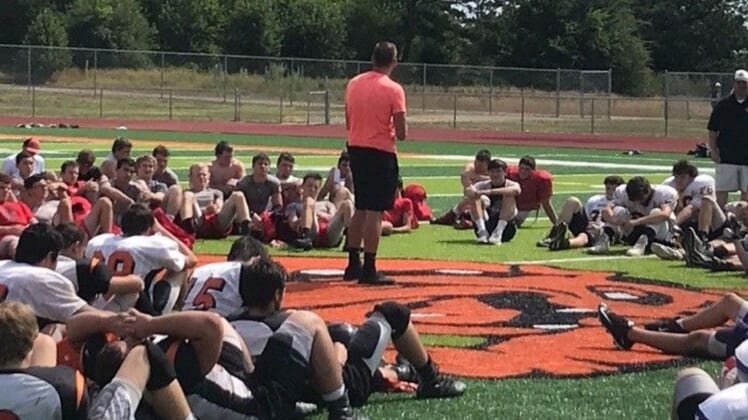 UPDATE: An Arkansas lawmaker has taken a bold stand to defend a young pastor who came under fire from out-of-town agitators over a devotional message he delivered to high school football players.

Konnor McKay, the 21-year-old pastor of Waldron Pentecostal Church of God, had been invited by the Waldron High School football coach to deliver the devotional at a regional football camp.

“I was invited to share an encouraging word with the football team,” McKay said on “The Todd Starnes Radio Show.” “I used Scripture and shared a message about teamwork – how to work together in life.”

His remarks were so inspirational that the local newspaper wrote a brief report and published a photograph of the young preacher addressing the players.

But the Freedom From Religion Foundation, based in Wisconsin, was not so complimentary of McKay’s remarks.

The Wisconsin-based group of atheists, agnostics and free-thinkers, was enraged by the devotional and accused the preacher of proselytizing.

They fired off a letter to at least one of the schools in attendance at the football camp – accusing the district of an “unconstitutional endorsement of religion.”

“Danville players were subjected to Christian proselytization by evangelist Konnor McKay,” FFRF attorney Colin McNamara wrote in a letter to the district superintendent. “It is a fundamental principle of Establishment Clause that public schools may not advance, prefer or promote religion.”

State Sen. Jason Rapert said he stands firmly behind the school district, the football programs and the preacher.

“Just because a person is a pastor does not exclude them from being able to share encouragement to students on teamwork and courage,” Rapert wrote on Facebook.

First Liberty Institute, a law firm that specializes in religious liberty cases, is representing McKay. They tell me their client did not proselytize. He did not hold an altar call on the football field nor did he baptize anyone. It was simply a devotional.

“He was invited by the head coach to give an encouraging word at football camp, which he did,” First Liberty attorney Michael Berry said on my nationally-syndicated radio program. “When FFRF found out [about it] they made false accusations against McKay and demanded he not be allowed back.”

But the out-of-town agitators remain steadfast arguing that the football camp is “rife with evangelism.”

“Students should not have to choose between participating in school-sponsored programs and violating their right of conscience,” McNamara wrote.

McKay says it’s incredible that his inspirational devotional on teamwork has caused such controversy.

“I’m a little bit shocked to be quite honest with you,” he told me. “This guy from Wisconsin – why does he care what is happening in Scott County, Arkansas?”

As you might imagine just about the entire state of Arkansas has thrown their support behind the hometown hero.

“I’ve received buckets of support from around the state of Arkansas,” he said.

First Liberty has vowed to defend the pastor no matter what the Freedom From Religion Foundation tries to do.

“Pastor McKay was invited to talk about teamwork,” Berry told me. “In times like these, you’d think the one thing we could agree upon is the value of teamwork. But this group of activists from Wisconsin seems to having nothing better to do but go around the country bullying unsuspecting schools.”

This go-around the out-of-town atheists, agnostics and free-thinkers may have bullied the wrong schools.