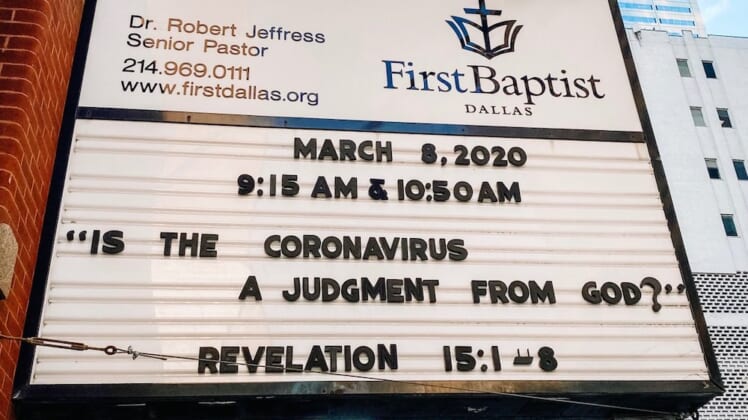 First Baptist Dallas’ senior pastor, Robert Jeffress, responded Monday to an expletive-laced tweet from Monica Lewinsky that criticized a billboard for his Sunday service in Dallas that read, “Is the Coronavirus a Judgement From God?”

Lewinsky took to Twitter to quote the topic and then wrote, “we are f***ed, people.”

Jeffress, who was a guest on the “Todd Starnes Radio Show” Tuesday, said the topic drew a massive online audience but said the coronavirus is “not one of the final judgments against the earth described in Revelation.”

He said dealing with viral diseases like COVID-19 and natural disasters is just comes with the territory of “living in a fallen world.”

Jeffress said that Christians should turn to prayer and avoid spending so much time consumed with fear about the virus. He said Vice President Mike Pence was right to begin an earlier coronavirus task force meeting with a prayer.

“People with faith know that prayer is the first thing we should be doing,” he said. But he also called on Americans to use common sense.

“The Bible says God hasn’t given us a spirit of fear, but he has of a sound mind,” Jeffress said. The pastor said that he suspended “welcome time” at his 14,000-member church in Dallas, where members usually shake hands and interact. His church will also safeguard the way communion is distributed.

The Centers of Disease Control and Prevention said the best way to prevent the virus is to avoid exposure. The agency said the virus is mainly spread from person-to-person contact and through “respiratory droplets produced when an infected person coughs or sneezes.”

Many places of worship throughout the world are closing their doors to prevent transmission. Saudi Arabia, South Korea, Italy and Iran have all announced changes to religious services.

Mattia Ferraresi, a writer for the Italian paper Il Foglio, wrote a column Tuesday in the New York Times about the number of services currently suspended and the possible ramifications.

She wrote that for believers, “religion is the fundamental source of spiritual healing and hope. It’s a remedy against despair, providing psychological and emotional support that is an integral part of well-being.”