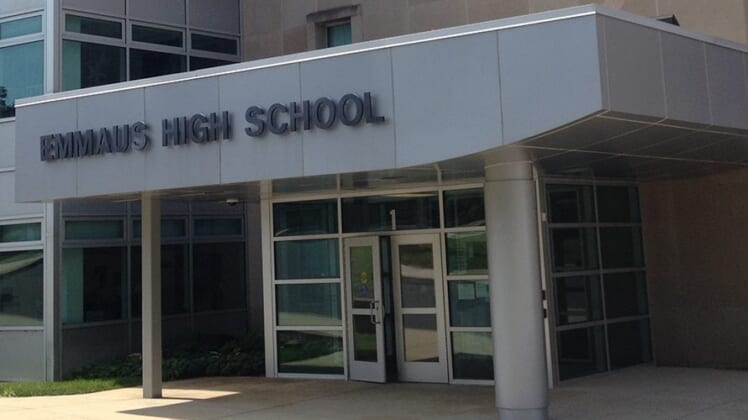 For four days last April students at a Emmaus High School in Pennsylvania were forced to watch videos selected by the “student-led” Gay-Straight Alliance.

The videos ranged from “9 Questions Gay People Have About Straight People” to a compilation of clips celebrating “marriage equality.” There was also a video educating students about gender fluidity – the idea there is no such thing as male or female.

“My son expressed to me that he felt bullied by the administration for being a heterosexual man and being forced to listen to LGBT advocacy on a daily basis,” one parent wrote in a letter to the school district.

Click here to get a personally-autographed edition of Todd’s new book – “The Deplorables’ Guide to Making America Great Again.”

The East Penn School District claimed the videos, shown during daily announcements, were about anti-bullying and the LGBT movement. But parents argue it was more about indoctrination. And when they asked to see the videos – the school district refused.

“This is a gross violation of parental rights,” Liberty Counsel attorney Richard Mast wrote in a June 22 letter to Supt. Michael Schilder.

Liberty Counsel, a law firm that specializes in First Amendment and religious liberty issues, is calling on the district to immediately release what they called “four pro-homosexuality” videos shown as part of the district’s “Unity Week” and “Day of Silence” activities.

“It does not pass the straight face test for the District to claim it need not provide parents with the actual video links, although the District required more than 2,800 students to view these videos, with no prior notice to parents, and no opportunity to opt-out,” Mast wrote.

Parents took their concerns to the school district – but they were rebuffed.

“Since when does a public school in the United States of America have the right to block a parent and tell them they will not allow them to see the controversial partisan programming they are requiring their children to watch,” another parent asked in a letter to the district. “We have every right to expect that our children are not being subjected to partisan indoctrination in our public schools.”

Supt. Michael Schilder said the video presentations were compiled by the school’s Gay-Straight Alliance as part of a student project and are therefore off limits to parents.

“Student work and student expression must always be protected,” he told The Morning Call. “A parent or member of the public has no right to view or access a student’s term paper, speech, or multimedia project just because he or she objects to the topic.”

Parents said they were told they had absolutely no say in what their children were being exposed to at the school house.

I was told by the superintendent (that) parents have no right to view these videos,” one person said in documents provided by Liberty Counsel. “I would appreciate knowing why I was not afforded the opportunity  to opt my son out of this targeted, planned, social engineering.”

LGBT activists have accused the moms and dads of being homophobic and anti-gay. However, parents say the core issue is about whether parents have the right to know what their children are being taught.

“For the record, neither Liberty Counsel nor parents who have contacted us object to the District promoting kindness amongst students or fighting actual bullying where it exists or promoting a ‘Unity Week’ that does not delve into matters of sexuality,” Mast wrote in his letter to the superintendent.

Liberty Counsel is threatening legal action unless the school district provides the videos to parents.

“The law is clear that parents, not agents of the state, including teachers, and certainly not GLSEN or its teacher or student affiliates with the GSA, have the right to direct the upbringing and associations of minor children,” Mast wrote.

It does make you wonder why the school district does not want parents to know what was shown to the children. Why the secrecy?

Liberty Counsel president Mat Staver told the Todd Starnes Radio show there is no doubt the school district is trying to indoctrinate students.