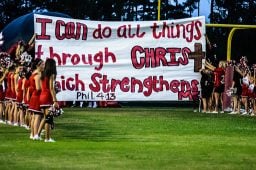 For the past six years a Texas school district has been waging legal warfare against a group of high school cheerleaders who wrote Bible verses on football run-through banners.

In October the Texas Ninth Court of Appeals ruled in favor of the Kountze Independent School District cheerleaders – declaring the “cheerleaders’ speech expressed on the run-through banners is best characterized as the pure private speech of the students.”

The school district has appealed to the Texas Supreme Court.

The cheerleaders are represented by First Liberty Institute, one of the nation’s top religious liberty law firms.

The Todd Starnes Show Podcast is an hour of common-sense conservative conversation — the fastest growing podcast in America! Click here for a FREE subscription!

Attorney Jeremy Dys told the Todd Starnes Radio Show the cheerleaders “have a right to be able to craft messages of their choosing on paper they purchased using paint that they had bought.”

I first reported the plight of the Kountze cheerleaders in 2012 when the Freedom From Religion Foundation filed a complaint about the run-through banners.

Instead of writing inflammatory messages on the banners, the cheerleaders decided to write inspirational messages – including Bible verses.

“And the cheerleaders looked to what they saw as their best source of inspiration – the Scriptures,” Dys said.

Instead of siding with the Constitution, the school district sided with the out-of-town atheists and banned the cheerleaders from writing Bible verses on the banners.

So the cheerleaders and their parents sued the school district.

In the October ruling, Justice Charles Kreger wrote that “given the nature of the expressive activity – a hand-drawn, playful paper banner, displayed by cheerleaders engaged in an extra-curricular activity, only momentarily before the football team runs through the banner – it is highly unlikely that the banner would appear to those in attendance at the game to contain a message endorsed by the school.”

“They would rather censor the messages of these cheerleaders than abide by the Constitution and I find that egregious,” he said.