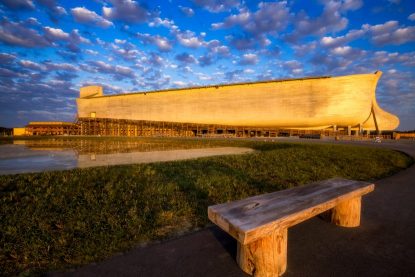 The president of the University of Central Oklahoma personally invited renowned Christian speaker Ken Ham to deliver a speech on campus – after student government leaders rescinded the original invitation.

“I’m thrilled my talk at UCO is back on again,” Ham said on the Todd Starnes Radio Show.

Ham, the founder of the popular Creation Museum and Ark Encounter, will speak on March 5 in the same campus venue where his original speech had been censored – Constitution Hall. He will deliver a speech titled, “Genesis and the state of the culture.”

“I’m thankful for the many Oklahomans who stood up for our constitutionally guaranteed rights to free speech and the free exercise of religion,” Ham said.

And Oklahoma lawmakers blasted the university for not intervening and stopping what some called “bullying by anti-Christian campus censors.”

Ham said he was grateful for the outpouring of support from Christians and free speech advocates from across the nation and in Oklahoma.

University president Don Betz defended the university’s commitment to free speech and freedom of expression in a letter posted on the taxpayer-funded school’s website.

“Our stated value as a higher education institution is to encourage and engage in inquiry that is free from censorship,” Betz wrote.

He went on to quote from the author Voltaire, “I may disagree with what you say, but I will defend your right to say it.”

The controversy started in January when the university’s student government association rescinded its invitation to Ham after they were deluged by complaints from LGBT students angry over his Christian beliefs.

“We are currently getting bombarded with complaints from our LGBT community about Ken Ham speaking on our campus,” student body president Stockton Duvall wrote in a Jan 25 email. “The backlash we are already receiving is quite immense and I do not want this event to be spoiled due to a topic that isn’t relative to Mr. Ham’s research of creationism.”

“A small but vocal group on campus put up a fuss about my talk and the university caved in, tearing up the contract and contradicting its policies of promoting ‘free inquiry’ and ‘inclusiveness’ on campus,” Ham said.

In advance of Ham’s scheduled speech, the university president also announced an initiative to educate students on the Constitutional provisions of the First Amendment.

Quite frankly, the fact that the university has to educate students about our constitutional rights is a sad indictment on the nation’s public education system.