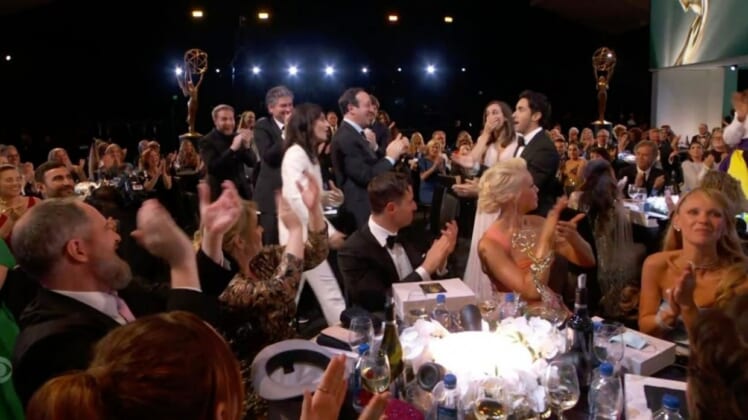 Are you tired of Big Tech censoring conservative news on your social media feeds? We found a solution! Click here to sign up for Todd’s FREE newsletter. You will receive conservative news every day – without censorship!

The Los Angeles County Health Department is responding to nationwide criticism after participants in Sunday night’s Emmy Awards did not wear face masks.

“Let me start by saying there is way too many of us in this little room,” Seth Rogen noted during remarks he delivered at the awards ceremony.

“What are we doing? They said this was outdoors. It is not. They lied to us,” Rogen, 39, continued with mock incredulity over how organizers seemed to flout regulations. “We’re in a hermetically sealed tent right now. I would not have come to this. Why is there a roof? It’s more important that we have three chandeliers than to make sure we don’t kill Eugene Levy tonight. That has been decided.”

The health department said that the television and film industry were exempt from the China virus rules governing regular people.

“LA County’s Health officer order requires everyone to wear a mask indoors, whether vaccinated or unvaccinated,” read a statement from the health department, obtained by CNN.

In other words, one set of rules for the elite and another set for the regular folks.

New: LA County Department of Public Health tells me that the mask-less Emmys were not in violation of the county's mask mandate because "exceptions are made for film, television, and music productions” since “additional safety modifications” are made for such events. pic.twitter.com/6S105zYjbJ