10 Positive Stories from 2021 That Will Lift You Up 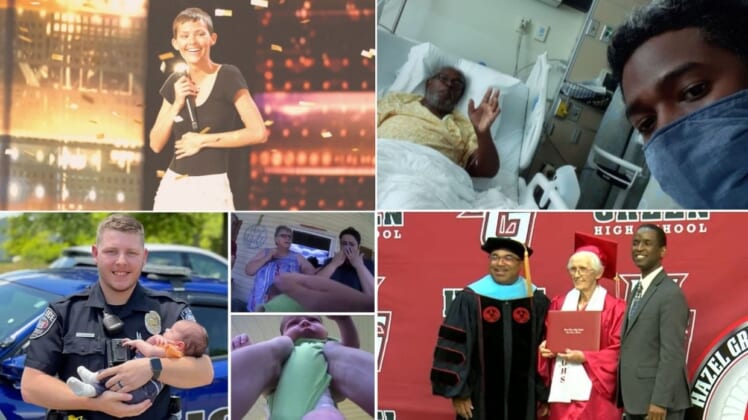 As we head into a new year, let’s look back at some good news along the way.

Here are some of my favorites from 2021:

Highly recommend you read more about her story and listen to the podcast she did with Fight the New Drug!

9. “God laid it on my heart”: Man finds boy, 3, missing in woods after several days

A Good Samaritan found a missing 3-year-old boy the morning after he found out about it during Bible study.

The boy’s mother called it a “miracle” and I couldn’t agree more. Read the full story here.

Social media can be toxic in so many ways but not for this pair of single moms who were complete strangers.

Kim Shufelberger of Olathe, Kansas, and her organ donor Brittany Clark, who is from Liberty, South Carolina, now consider themselves “sisters.” Read their incredible story here.

7. Teen gets healing and salvation after pastor prays over dislocated shoulder: “Craziest miracle…”

Speaking of social media, a pastor in Washington is calling this a social media revival after praying for healing and salvation over Instagram Live!

Jacob Coyne, pastor at Bethesda Church NW in Vancouver, prayed for a teen named Genesis, who was trying to decide between Islam and Christianity — I think he got his answer. Check it out here.

One Louisiana man inspired millions after helping a homeless man he found sleeping on his car lot.

Alcide Dominique said the man was “just happy to be with people who were … treating him like a human being.” His story went viral, which you can read here.

You’re never too old to achieve your goals.

That’s just one lesson Grace Lee McClure Smith learned on her 79-year journey to getting her high school diploma at 94-years-old. See how she celebrated with her 26 great-grandkids.

4. Son donates liver to father: “It’s a miracle from God”

A father and son in Virginia were able to celebrate their bond through a liver transplant.

“God gave me another chance to live through my son,” the father said. Read their incredible story.

A newly minted Arkansas police officer was being praised as a hero after a dramatic rescue of a choking infant.

“He saved my baby’s life,” the dad told the local news. Check out their story here.

2. Pregnant mom risked her life to save kids from drowning: “She’s a hero”

A pregnant mom is being praised as a hero for saving several children in Lake Michigan from drowning.

“God did his thing today, and he put me exactly where I needed to be, once again,” the mom said. Read her amazing story here.

In one of the most emotional stories I shared this year, Liberty University graduate Jane Marczewski, who goes by Nightbirde, stunned America’s Got Talent with an unforgettable golden buzzer performance.

Not only did the 30-year-old singer from Zanesville, Ohio sing her heart out, but she made AGT judge Simon Cowell get choked up with her original song “It’s OK” about her battle with cancer. Read the story and watch her performance that also made me cry here.

If you’re looking to add more gratitude and encouragement into your life in 2022, be sure to sign up for my FREE newsletter with positive stories likes these in your inbox!

And if you’re looking to add some immune-boosting power to your daily routine, check out Four Sigmatic’s special offer if you use promo code “GOODNEWS”!