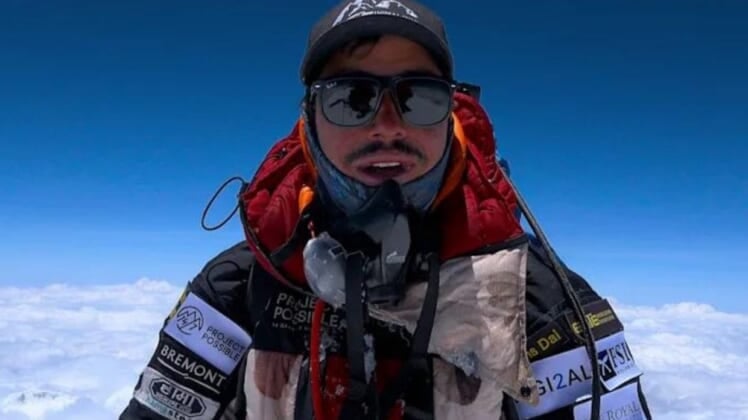 Nirmal “Nims” Purja set out to show the world that anything is possible.

The Netflix documentary “14 Peaks: Nothing Is Impossible” chronicles his record-breaking adventure where he climbed 14 of the highest mountain peaks (all above 26,000 feet) in the world in a record-breaking six months and six days. The previous record was seven years.

“I was told my plan was impossible, so I decided to name it Project Possible,” Purja said. “It doesn’t matter where you come from. You can show the world nothing is impossible.”

Be sure to sign up for Caleb’s FREE newsletter for more encouraging stories like this one in your inbox!

Nims was born in Nepal and served in the British military for 16 years as a Ghurka for six and 10 with the UK Special Forces in the Special Boat Services (SBS), where he started mountain climbing. He left to become a historic mountaineer.

“Elite combat wasn’t enough,” he said. “I wanted more of a test. Something nobody thought was possible – to climb all fourteen ‘death zone’ mountains in seven months.”

The 38-year-old athlete has since accumulated a growing list of record-breaking summits and high-altitude rescue missions.

“14 Peaks” follows his incredible Sherpa team as they trek through extreme weather, life-or-death situations, and Purja has an ill mother back home as he needs to raise money to fund the journey.

Whether it is a rescue mission or an expedition, Purja’s approach is the same: “Everything in life is possible armed only with a determined approach and positive mindset.”

He wanted to bring recognition to the Sherpas who have gone nameless and faceless despite their life-saving work and amazing accompishments.

“We got the right platform to be able to do justice to those underrepresented, extreme high-altitude ninjas,” Purja said.

Purja continues to push the boundaries of what many though possible.

Most recently in January, he joined a team of nine Nepalese mountaineers to complete the first-ever winter ascent of Pakistan’s K2, the world’s second-highest peak that is known as “savage mountain” and is more dangerous than Everest.

Today, he is supporting the next generation of climbers through the Nimsdai Foundation.