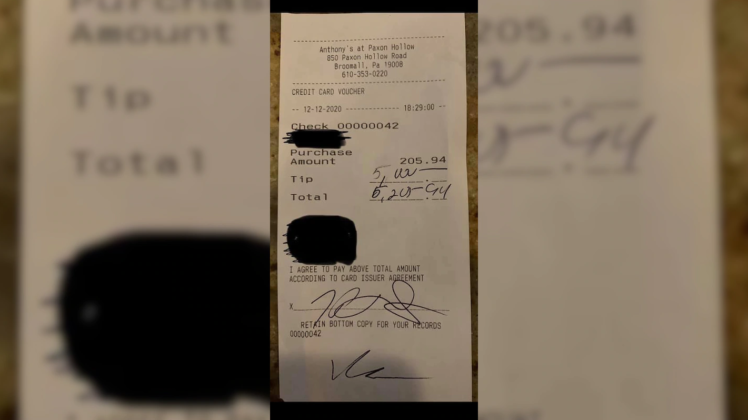 The waitress, Gianna DiAngelo, is currently attending Widener University in Chester, Pennsylvania, and works at Anthony’s At Paxon Hollow. Paxon Hollow is a country club in Pennsylvania.

KYW-TV reported that the amazing gift was left by a few regular customers.

In response, DiAngelo said, “I’m just happy with anything…I just couldn’t even believe it…I’m going to put that money away toward college and pay it forward to do something good for other people.”

Anthony’s wrote on their Facebook, “We have no words other than THANK YOU !!…We LOVE and APPRECIATE you ALL !!”

Fox News reported that from December 12th to the fourth of January, all indoor dining is suspended for the state of Pennsylvania per the orders of Governor Tom Wolf. However, outdoor dining and take-out services are allowed to continue.

The tip helped provide a nice since of hope going into this difficult time.

BIG TIP: A group of regular diners left a $5,000 tip on a $205 bill at Anthony’s at Paxon Hollow in Media. The manager tells they golf there frequently…. he says the extremely generous gesture happened earlier tonight. @CBSPhilly pic.twitter.com/NmESGzmDGe