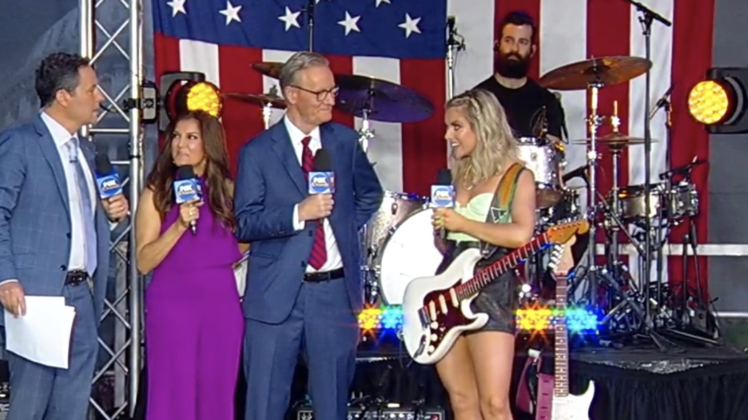 Get get a copy of the explosive book by Todd Starnes – Culture Jihad: How to Stop the Left From Killing a Nation. It’s available at your favorite bookstore or ToddStarnes.com.

Lindsay Ell, a country-pop singer, kicked off the network’s Fourth of July weekend with a full-blown concert outside their New York City headquarters. It’s unclear why Fox chose a Canadian singer instead of an American.

It didn’t take long for Ell and her band to prove they don’t exactly have many conservative bonafides.

She started off the concert by giving a shout-out to pro-abortion women in the United States.

“Thank you so much Fox & Friends,” she said as she started the televised concert. “This song goes out to all the women fighting for rights. I love you so much.”

And Ell’s drummer was wearing a RBG shirt, as in the late Supreme Court Justice Ruth Bader Ginsburg.

“Really? A singer fighting for “women’s rights”? Very offensive,” one angry viewer wrote on Twitter. “Why all the Canadian singers. How about promoting from within? Sorry. Did you miss the “America First” idea?”

“You want to sell your music/entertain or say stupid dividing political stuff? Maybe just sing. Disgusting way to start your #1 single this morning on Fox. Turned you off…forever,” another irate viewer ranted on Twitter.

And another wrote, “Fox News were you duped by @lindsayell into her premeditated promotion of abortion or did you know in advance ? Having a Canadian telling us how to live was insulting. Do better !”