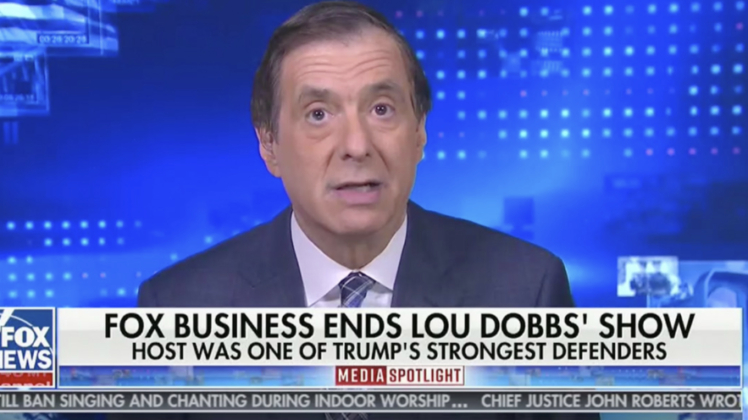 Howard Kurtz, the host of Fox News Channel’s MediaBuzz, address the abrupt cancelation of Lou Dobbs Tonight, one of the most popular programs on Fox Business Network.

“On Friday, Fox Business Network announced it is canceling Lou Dobbs tonight, the network’s highest rating show. I’ve known Lou as a talented broadcaster for decades. He was controversial at CNN. He’s been controversial in the decade he’s been here,” Kurtz said.

Kurtz is a former retread from CNN who was hired by Fox News — the network’s answer to fellow leftist Brian Stelter.

Dobbs became one of the most passionate defenders of Donald Trump during his presidency, and of his claims of election fraud,” Kurtz said. “In my opinion, Dobbs sometimes went too far. But that was his right as an opinion host, and it’s Fox’s right to decide its programming. I want to wish Lou the best in the future.”

Among those defending Dobbs were President Trump and Robert Jeffress, the pastor of the First Baptist Church in Dallas.

Some analysts say the ouster of Dobbs is not a sign that Fox is surging to the left.

“Dobbs is going away. That’s one show on one channel. There are many other shows like him,” said CNN’s Chief Media Correspondent Brian Stelter said on “Reliable Sources.” “There is no sign that Fox is moving toward the center, back to the kind of centrist, reality-based middle. No sign of that at all. Dobbs seems like an anomaly.”

I completely disagree. Over the past two years a number of known conservatives – either on camera or in editorial roles – have been booted. When the network declined to renew my contract, I was replaced by a closet Never Trumper.

Dobbs was one of the few authentic conservatives left at Fox News Channel. He wasn’t just pretending to be a conservative to draw a paycheck.

The removal of Dobbs just doesn’t make much sense. His show actually gets strong ratings — compared to other programs like “Kennedy.”