Trump is Putting a Gun-toting, Bible-Clinging American on the Supreme Court 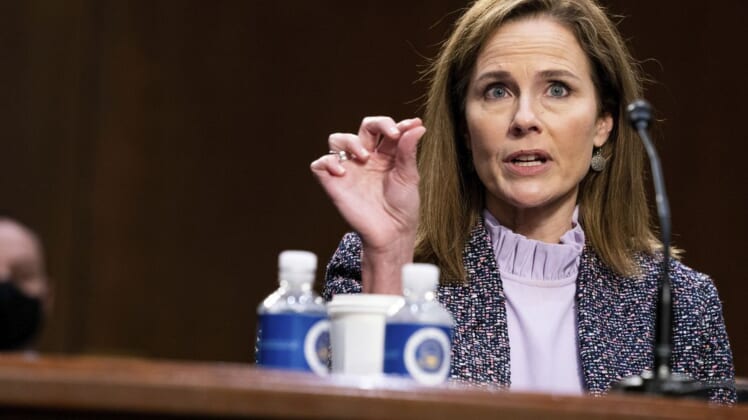 Todd Starnes tells Sean Casey on “The Sean Casey Show” that SCOTUS nominee Amy Coney Barrett is “just knocking it out of the ballpark” during her confirmation hearings this week.

Barrett has seven kids, including two adopted from Haiti. Starnes says Barrett “checks off so many things on the list.”

In addition, when asked to share her notes during one of the hearings, Barrett showed off her intelligence by holding up a blank notepad.

A devout Catholic, she was asked if she owned a gun during the hearings, and she answered that she does.

Democrats don't want Christians to serve in the government. Check out my interview with @SeanCaseyShow https://t.co/SYgFvN4GOy

When Starnes heard her answer, he says he thought ‘My goodness, Trump is putting a gun-toting, Bible-clinging American'” on the Supreme Court.

After initially going after her “Catholic dogma,” the Democrats have finally started to back off attacking Barrett on her faith.

“I think they knew they were going to get big blowback, especially from Catholics,” Starnes explains. “I think they learned their lesson there.”

Senator Sheldon Whitehouse (D-RI) went on a 30-minute tirade during one of the hearings, and Starnes says it was the very “definition of ‘mansplaining'” as he lectured Judge Barrett.

“He literally would not let Judge Barrett get a word in edge-wise,” Starnes adds.

You can check out the full “Sean Casey Show” podcast HERE.