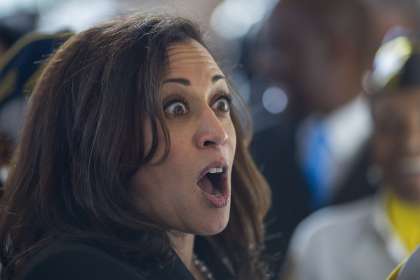 In an obvious show of hypocrisy and favoritism, the Washington Post has covered up an offensive joke Kamala Harris made about what it was like campaigning for president.

The Washington Post article, which was originally published in the summer of 2019, has now been updated to not include Harris’ comment.

In the interview, reporter Ben Terris originally wrote: “It was the Fourth of July, Independence Day, and Kamala Harris was explaining to her sister, Maya, that campaigns are like prisons.“

The interview focused on Harris’ relationship with her sister, Maya. When talking about what it was like running for the candidacy, she said the following:

“It’s a treat that a prisoner gets when they ask for, ‘A morsel of food please,’ ” Kamala said shoving her hands forward as if clutching a metal plate, her voice now trembling like an old British man locked in a Dickensian jail cell. “‘And water! I just want wahtahhh….’Your standards really go out the f—ing window.”

That has been altered since its original publication. The article added another byline credit, political reporter Chelsea Janes. But what’s really bizarre is that the anecdotal section has been totally edited to hide Harris’ offensive remarks.

The article even admits the article has been updated. You can check out the current version here.

It now reads that the article was published in January 2020. How convenient, considering she was sworn in as vice president this month. This isn’t the first time Harris has said something cringe-worthy before, and I bet it won’t be the last.

But, the Mainstream Media will continue to try to hide anything negative regarding the Biden Administration, so it’s up to us to uncover the truth.