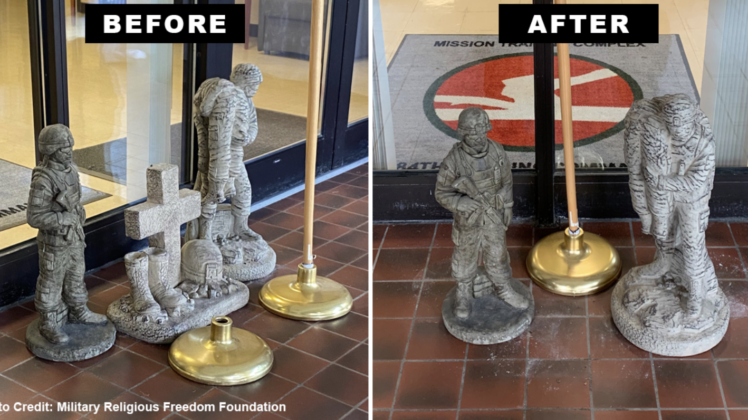 WARNING: DEMOCRATS WANT TO CRACK DOWN ON CONSERVATIVE NEWS AND CONTENT. I want to strongly urge you to sign up for Todd’s free newsletter. It’s your only lifeline to conservative news and commentary.  Click here to subscribe.

The cross had been part of a display that was posted outside a training complex at the New Jersey military base.

The Military Religious Freedom Foundation, a far-left organization that gets easily triggered by Nativity scenes and prayers to Jesus, fired off an angry letter to Col. Jon Brierton, the base commander.

“The only appropriate place on a military base for this garden gnome-like Christian sculpture grouping is the chapel grounds. Its placement in the main entrance of the Mission Command Complex is a blatantly impermissible promotion of religion,” the MRFF said.

The MRFF, led by Mikey Weinstein, claimed that at least 17 soldiers suffered some sort of adverse mental reaction to the presence of the cross on military property.

“To the soldiers, this sculpture, at the main entrance of a command building, was a completely unacceptable and in-your-face promotion of Christian supremacy by the command. One MRFF client, who encountered the display on a visit to Fort Dix and sent the below photo to MRFF, described it as ‘quite jarring,'” the MRFF said.

In response, the woke base commander waved the white flag of surrender.

“It is my priority and responsibility to ensure that every service member, civilian and family member on the joint base feels welcomed and safe on the installation,” Brierton wrote in an email to Weinstein. “Our goal is to embrace and foster a diverse and inclusive environment where people from all backgrounds feel empowered to conduct their military duty and live their life with pride and dignity and that we treat each other with respect.”

So, in the spirit of inclusion, diversity, pride and respect President Biden’s Army gave the cross the heave-ho.

“As leaders, it is our responsibility to provide training and resources that enables our force to accomplish their mission, builds resiliency and enriches the fabric of our force. We must ensure service members from all religions/faiths and backgrounds feel supported and included in our community,” the base commander said.

I’ve covered the angst-filled mutterings of the Military Religious Freedom Foundation for well over a decade now and I noticed some rather glaring similarities in all of the cases.

The aggrieved “Christian” service members are always anonymous — always. And all of the complaint letters bear the same adjective-laden ramblings that Mr. Weinstein is notorious for sending to the Pentagon. It does make one wonder about the authenticity of the complaints.

I find it very hard to believe that soldiers on the battlefield would renounce their faith in God and instead cry out to Mikey Weinstein and the Military Religious Freedom Foundation for salvation.