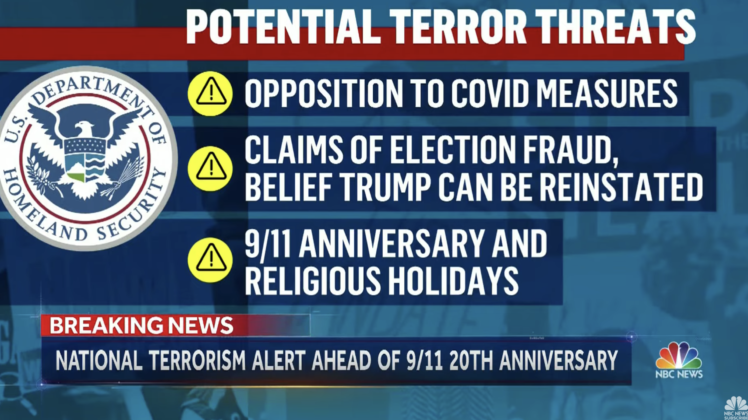 If you refuse to get the China virus vaccine or decline to wear a mask you could be considered as a potential terror threat by the federal government, according to a document obtained by The Todd Starnes Radio Show.

The Department of Homeland Security released a warning about potential terror threats and topping its list is anyone who might be in opposition to “COVID measures.”

“Such threats are also exacerbated by impacts of the ongoing global pandemic, including grievances over public health safety measures and perceived government restrictions,” DHS noted.

The Biden Administration has decided to borrow a page from the Obama White House – never let a crisis go to waste. As I wrote in my book, “Culture Jihad: How to Stop the Left From Killing a Nation,” the Left will use any crisis to curtail freedom and liberty.

Homeland Security said there is a “heightened threat environment” ahead of the 20th anniversary of the September 11 Muslim terrorist attacks.

But they seem to be more concerned about domestic incidents of alleged terror committed by anti-government and anti-authority extremists.

“These extremists may seek to exploit the emergence of COVID-19 variants by viewing the potential re-establishment of public health restrictions across the United States as a rationale to conduct attacks,” DHS said. “Pandemic-related stressors have contributed to increased societal strains and tensions, driving several plots by domestic violent extremists, and they may contribute to more violence this year.”

Homeland Security said they will identify and evaluate “online activity associated with the spread of disinformation, conspiracy theories, and false narratives.”

Is it possible that Homeland Security agents could be monitoring law-abiding Americans who object to the suspension of our civil liberties? Is DHS admitting they are conducting surveillance against anyone leading efforts to stop mask mandates?

The DHS bulletin also acknowledged that the government is “advancing authoritative sources of information to debunk and, when possible, preempt false narratives and intentional disinformation, and providing educational materials to promote resilience to the risks associated with interacting with and spreading disinformation, conspiracy theories and false narratives.”

In other words, there’s a good chance DHS is working with Big Tech to shut down any prominent voices in the effort to protect our freedoms.

If I’m reading the DHS security briefing correctly, there’s a good chance you could spend Christmas in Gitmo if you defy the government’s orders on mask mandates, vaccination papers or mandatory shutdowns.