Caleb Parke: Why I Proudly Support Israel as a Christian Zionist 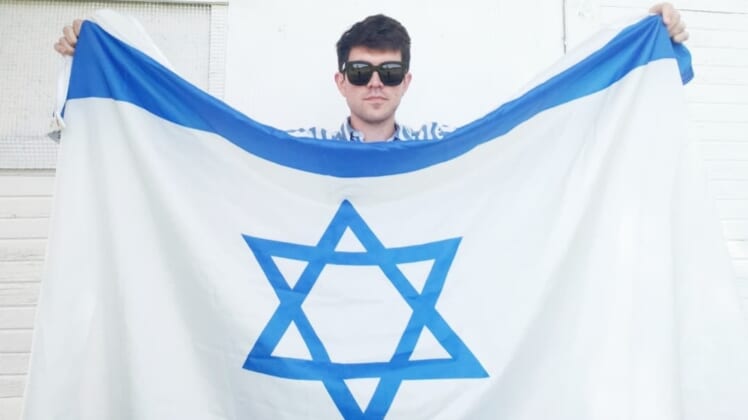 Before you read this, I want to encourage you to sign up for my newsletter.

I am a proud Christian Zionist. I was baptized in the Jordan River by a man named John. I have prayed at the Western Wall several times. And I have been to the empty tomb.

As a follower of Jesus, I care deeply about Israel. I could tell you many reasons why, as an American, I support and defend Israel, our greatest ally in the Middle East, but I’m going to focus on the deeper connection. I am a citizen of heaven before anything else.

The Bible comes to life in Israel.

I’ve stood where David wrote the Psalms in the City of David. I’ve walked through Hezekiah’s Tunnel, which is more than 2,700 years old and where water is still running today. I celebrated Shabbat (Sabbath) with an Israeli Jewish family. I’ve been on the Sea of Galilee, where Jesus walked on water. I’ve been to the site of the cross and the empty tomb. With each dig, more biblical history is being unearthed.

The very foundations of our faith can be seen, touched, and lived in the Holy Land — but going there doesn’t make you anymore Christian. It can, however, deepen your faith and change you forever. That I can tell you.

Why Should Christians Support Israel?

Let’s look at a few verses from the Bible, but I’d encourage you to read through the Bible for yourself.

First, God the Father has a heart for Israel, the only nation He created. And He made an everlasting covenant with Abraham, Isaac, Jacob, and their descendants.

WATCH: ONE OF MY FAVORITE SERMONS

In the beginning, God made a covenant with Abraham (Abram at the time) in Genesis 12:1-3:

“I will make you into a great nation,
and I will bless you;
I will make your name great,
and you will be a blessing.
I will bless those who bless you,
and whoever curses you I will curse;
and all peoples on earth
will be blessed through you.”

God told Abraham he would give him the land of Canaan for his descendants. There are several passages that lay out the Promised Land boundaries.

God’s faithfulness and other incredible characteristics are revealed to us through his unfailing love and devotion for Israel and her people, through whom the story of redemption is found.

As Gentiles, we are grafted into the faith. Jesus was born to Jewish parents, raised Jewish, and was a Jewish rabbi, and he even had “King of the Jews” written over him on the cross. Christians have an eternal debt of gratitude to the Jewish people. You can’t have Christians without the history of the Jewish people.

Jesus even told a Samaritan woman in John 4:22: “Salvation is from the Jews.”

We are also told in Psalm 122:6: “Pray for peace in Jerusalem. May all who love this city prosper.”

As all believers await the Second Coming of Christ, I believe His triumphant return will be in Jerusalem, the Eternal Capital of Israel.

Despite what some say today, there isn’t an expiration date on God’s eternal covenant with Abraham. The story of the Jewish people and their hope for self-determination didn’t end when they stopped writing books of the Bible. Israel is a continuation of the faith story we’ve been grated into as Christians.

Let me be clear. I don’t hate Palestinians. I hate terrorism. I hate the shedding of innocent blood. I hate attempted genocide of the only Jewish State. I hate lies and misinformation about Israel. Anyone can hate me or call me names but I can respond with love – thanks to the Holy Spirit.

Nor do I think Israel is perfect. Again, just read the Bible. Israel failed miserably then and it’s certainly not doing everything right today. It is made up of people, just like America. God is the perfect one. The hypocrisy against Israel at the United Nations and on the Left and coming from Islamist nations, however, is intolerable.

I want to shine a light and share the truth, much of which is not reported in the mainstream media nor tolerated on college campuses or allowed on social media anymore.

Also, we are commanded to love our neighbor and bless our enemies. I pray for Palestinian people to be freed from terrorist leaders who put their own civilians in harm’s way. My heart yearns for peace in the Middle East. My heart breaks for my Jewish brothers and sisters and, of course, Christians in the region, surrounded by Islamic radical terrorists who want to wipe them off the face of the planet.

I’ve noticed many of the so-called “pro-Palestinian” people like to write #FreePalestine and curse Zionists and Jews and Christians. I feel sorry for them but I will not tolerate hate or discrimination.

May God bless you.

My prayer: Father, bless Israel and her enemies. You are the Prince of Peace and we ask for your shalom to invade earth right now. In Jesus’ name, Amen.

If you’re interested in reading more, I’d encourage you to get a copy of “Standing With Israel: Why Christians Support the Jewish State,” by David Brog.