Liz Peek: Did Biden Convince World to Get Tough on China? Not a Chance 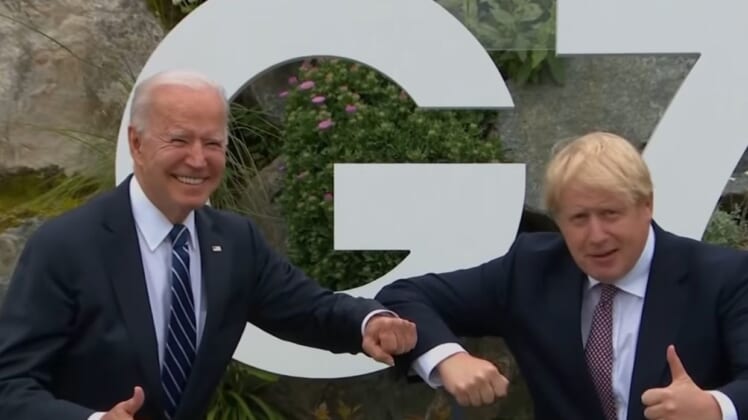 Think President Biden will convince the free world to get tough on China? Not a chance.

In recent few days, Joe Biden met with the leaders of the G-7 nations, America’s most important allies. The meeting comes in the wake of the single greatest act of villainy the world has ever known – China’s willful unleashing of a deadly virus on the globe, which caused millions of preventable deaths and untold trillions in economic harm.

China must be made to pay; that was Biden’s brief.

Concluding their talks, the G-7 leaders have agreed to punish China by … investing in third-world infrastructure.

Yup, that’s the plan. That’s the penalty Beijing will bear for having lied about the virus, denied its easy transmission from human to human, suppressed whistle-blowers warning of its danger and – possibly — for having created it in the Wuhan Institute of Virology.

Biden has convinced his fellow heads of state that not only can the U.S. “Build Back Better,” but that the collective group should promote a “Build Back Better World” campaign aimed at narrowing the $40 trillion infrastructure needs of the developing world.

And guess who will end up shouldering most of that effort? As reported in the South China Post, “the United States will work with the U.S. Congress to supplement existing development financing.”

You could have seen this coming a mile away; Biden, happy as a clam to “be back.” did not.

The point of this “values-driven high-standard and transparent infrastructure partnership” is to counter Beijing’s infamous Belt and Road initiative. Since 2013 China’s government has brought 100 underdeveloped nations into its orbit by lending heavily to build out those fragile countries’ infrastructure, making countries like Pakistan indebted to China and logistically linked.

China’s Belt and Road push garnered bad reviews when it led to several countries’ near bankruptcy and total subservience; President Xi Jinping, mindful of the optics, stopped boasting about the program, which nonetheless is ongoing.

While Americans might have hoped the G-7 leaders would throw sanctions on Beijing officials, erect barriers to Chinese tech firms or eject China from the World Trade Organization, they will now watch our government direct billions in aid to jumpstart other countries’ infrastructure repair.

That will teach Xi Jinping!

To be fair, the G-7 in its communique also calls for another WHO-backed study of COVID-19’s origins, including “in China,” the only reference to China in the entire 50-page document. Elsewhere, “concern” about forced labor fails to mention the Uyghurs or Xinjiang Province.

Why the tepid response to Beijing’s criminality? To quote Rep. Ilhan Omar, D-Minn., “It’s all about the Benjamins baby.”

Neither the Biden White House nor the G-7 (Germany especially) is willing to forgo China’s money train – not even for a moment. The big U.S. corporations that supported Biden’s campaign for president and their foreign rivals depend on Chinese sources and long for Chinese customers. That’s who makes policy.

To his credit, Biden appears to genuinely believe that the U.S. and other democratic countries can out-compete China for the favor and support of the developing world. He thinks that ladling money out to poor countries with no strings attached will resonate, since China tethers development aid not just with strings but with steel bars.

Biden often asserts that the free world will win out over autocracies. He thinks that we will win because we will emphasize gender equality and the environment, both of which are central to the G-7 communique.

Unfortunately, the experience in the U.S., where Biden is alarmed about our own infrastructure shortcomings, is not promising.

Biden is pushing very hard to spend trillions on Building Back Better in America, but as he continues to cancel every remaining vestige of Trump’s legacy, he is complicating that effort.

For example, Biden recently restored criminal penalties for inadvertently killing migrating birds. Why? Because President Trump had eased those penalties. Don’t laugh; this is, as Biden might say, “For real.”

The upshot of this idiotic decision, meant to punish oil and gas companies that have historically been charged under the Migratory Bird Treaty Act for accidental bird deaths, is that operators of wind towers – an energy source critical to achieving Biden’s promise to halve emissions by 2035 – could face severe penalties.

Wind towers are estimated to kill up to half a million birds each year; as Biden pushes for more turbines, and especially offshore, the number will soar.

Though the government will not be inclined to prosecute wind farm operators, you can bet that won’t stop environmentalists from waging legal warfare on behalf of their feathered friends.

At the same time, and for the same reason, Biden is planning to redo Trump’s Waters of the U.S. rule, which will also complicate his infrastructure push. The wrangling over water rules began under President Obama, when the EPA claimed jurisdiction over every ditch and brook within hailing distance of navigable waters. This rule was also primarily targeted at oil and gas producers, but ended up a source of friction with farmers and townships suddenly blocked by federal permitting rules.

Though the EPA will likely not step in the way of politically favored green energy projects, increasing regulations that will create more speed bumps for fixing our tunnels and airports is just stupid. Make no mistake – the same impulses will come into play whether the building is undertaken in the U.S. or in Latin America, where some of the international investments are likely to take place. Our “values-based” progress will prove dismally slow.

Meanwhile, even as the G-7 committed to hobbling their own economies to prevent global warming, China, the globe’s greatest source of emissions, has eased up on its push, meagre as it was.

Nobody is happier than Xi Jinping that “America is back.” That’s why China supported Biden for president; the G-7 outcome proves it was the right choice.

LISTEN TO LIZ PEEK ON THE TODDCAST PODCAST BELOW: