Liz Peek: Joe Biden has been president for 96 days. It seems like a lifetime.

Joe Biden has been president for 96 days. It seems like a lifetime. 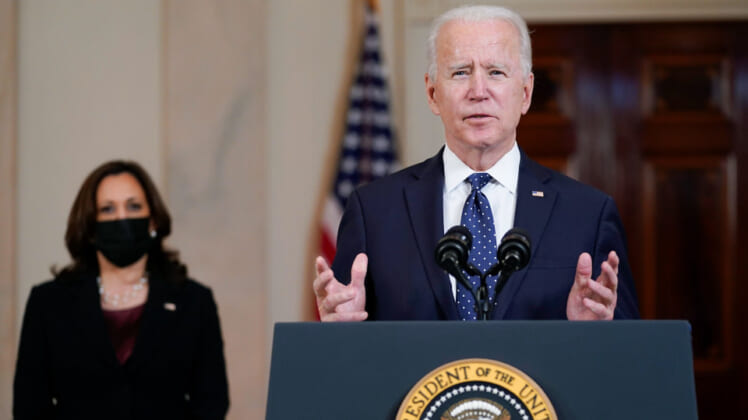 Joe Biden has been president for 96 days. It seems like a lifetime.

In just three months, under Biden’s presumed leadership, Democrats have threatened to pack the Supreme Court, eliminate the filibuster, abolish the Electoral College, grant statehood to Washington, D.C., federalize voting laws, and enact a labor bill that would overturn right-to-work statutes in 27 states.

Democrats want unlimited power and are mobilizing all possible means to get it.

On the day he took office, Biden set about dismantling every policy initiated by his predecessor. Most damaging, the president reversed President Trump’s immigration measures, setting up a humanitarian and security nightmare at our southern border.

As president, Biden has worsened race relations by frequently denouncing the United States as “systemically racist” and insulting the citizens of Georgia by foolishly declaring their legislators’ voting bill as “Jim Crow on steroids.” He has also larded his Cabinet with people like U.N. Ambassador Linda Thomas-Greenfield, who claimed the “original sin of slavery weaved White supremacy into our founding documents and principles.”

It almost seems as though Biden and the people around him don’t like the United States very much.

Voters are not wowed by Biden’s behavior. A recent Washington Post poll showed his approval rating at 52%, better than Trump but below most other presidents after their first 100 days in office. More telling perhaps is that the number of those who “strongly” disapproves of Biden (35%) tops those who strongly approve (34%) even though the economy is improving and despite laughably positive coverage by the liberal media.

Those numbers will get worse as voters learn more about Biden’s proposals. For example, McLaughlin & Associates polling shows 67% of Arizona’s voters are unaware that H.R. 1, Democrats’ effort to federalize voting laws, would overturn their state’s popular voter ID and signature verification requirements.

Biden’s furious legislating is remarkable considering that Biden took office just as the country was getting back on its feet. All he had to do was to sit back and take credit for the rollout of the vaccines and rapidly recovering economy.

He couldn’t even manage that.

Both Biden and Vice President Kamala Harris foolishly sowed doubts about Trump’s vaccines early on; now their message is muddled. The White House urges people to take the shot, but also cautions that even fully vaccinated people should wear a mask and resist traveling or dining indoors. No wonder hesitancy is high.

When Biden was inaugurated, COVID was in retreat and much of the country was returning to normal. Americans were sitting on an estimated $2 trillion of excess savings and consumer income surged at a stunning 10% pace in January, boosted by $600 checks from December’s stimulus plan.

Consequently, the economy took off like a shot; the Atlanta Fed’s latest estimate is that GDP grew by more than 8% in the first quarter.

Naturally, hiring began to pick up.

Meanwhile, manufacturing was expanding at the fastest pace since 2018, inventories were low and a boom in housing added fuel to a red-hot economy.

But it wasn’t red-hot enough for Biden. Instead of hitting the pause button after Congress had authorized more than $3 trillion in excess spending and the Federal Reserve had pumped unprecedented liquidity into the financial system, he powered ahead with the $1.9 trillion American Rescue Plan, which mainly rewarded teachers’ unions and other groups that elected him. In addition, it contained hundreds of billions of dollars to bail out badly managed blue states ravaged not by COVID but by their Democratic leadership.

Biden and his team didn’t even try to argue the economic rationale for handing out another $100 billion for schools that remained closed or $1,400 checks to people who were still employed. Their excuse was: “free” money polled well.

But the Rescue Plan wasn’t big enough for Biden and power-hungry Democrats. They recently proposed a $2.25 trillion infrastructure plan, which is as much about our country’s infrastructure as Moby Dick is about fishing. This giant “American Jobs Plan” contains more goodies for Democrat backers, with yet another $100 billion for schools, more money for minority communities, hundreds of billions for “green” projects like electric vehicle subsidies, $10 billion for a “Civilian Climate Corps,” and $400 billion purportedly for elder home care but really meant to help the SEIU add to their union’s dues-paying membership.

To fund this outrageous bill, Biden has proposed increasing the corporate tax rate to a level that would again put the United States at a disadvantage compared to our international rivals.

But that’s not all. Despite our fiscal deficit topping levels not seen since World War II, Biden is also pushing a second “social” infrastructure bill – another trillion-dollar handout to Democrat supporters – and wants to raise taxes on successful Americans to pay for it. In particular, he proposes hiking the tax rate on capital gains to 43%.

What has this mad-cap torrent of legislating and spending delivered? Increasing concern about rising deficits, higher taxes and inflation, none of which was necessary and all of which could sidetrack growth. The latest Producer Price Index showed prices for goods and services jumped 1% in March and was up 4.2% from the year before.

Worse for Biden, it has also delivered an angry and determined opposition that is pouring record amounts of money into GOP coffers and is determined to retake control of Congress in 2022.

According to McLaughlin & Associates polling, the generic ballot today is tied.

As Democrats push issues that surveys show are not top of the list of most voters’ concerns, such as race and climate, and as Republicans address more pressing matters like restoring law and order and reopening the economy, that will shift, opening the door for the GOP to regain power and stop the Biden blitz.