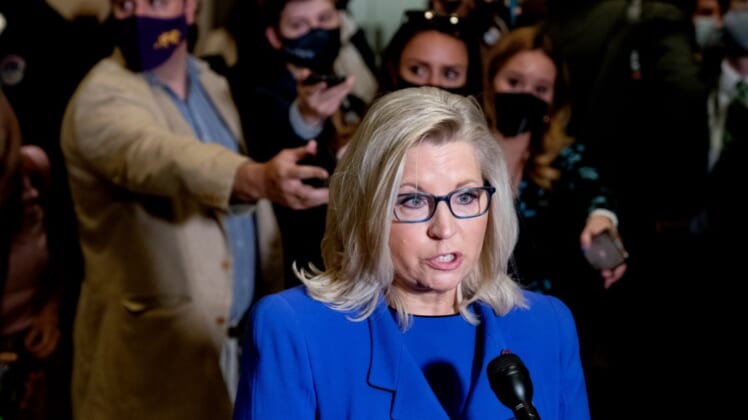 Who cares about Liz Cheney?

Other than a few diehard “Never Trumpers,” nobody. Fellow Republicans may bounce the Wyoming representative from her job as their conference chair; that is their right. Cheney represents a state that Donald Trump won by more than 40 percentage points, and it is unlikely that voters in Wyoming have turned en masse against the former president. Most Republicans consider Trump the head of the party; 60 percent want him to run again in 2024.

Why should she hold a leadership position?

The brouhaha over Cheney is a sideshow — a very useful distraction for Democrats trying to push a slew of big spending bills and monumental tax hikes through Congress. One of Democrats’ highest priorities is H.R.1, a monumental re-write of our election laws that’s not getting nearly the attention it deserves.

Most Americans have no idea what the innocuous sounding 886-page “For the People Act” is all about. Democrats want to keep it that way. Writing that H.R.1 (and its counterpart S.R.1) would put the federal government in charge of managing elections, overriding state and local laws, makes it sound wonky and bureaucratic. It is not.

It is, instead, a direct attack on freedom of speech, federalism and fair elections. Democrats don’t want Americans to know that the bill would prevent them from privately donating money to favored causes in the future, or that Democrats are trying to eliminate voter IDs even for absentee voting and make it harder for states to purge voter rolls.

Democrats claim H.R.1 is needed to overturn laws passed in GOP-led states after the 2020 election that would limit access to voting. Rubbish. Democrats have been working on the legislation since 2019, long before Georgia and other states moved to ensure voting transparency and curb questionable measures that were adopted in response to COVID-19.

The bill is clearly written to favor Democrats as, for example, it mandates that all states allow ex-felons to vote in presidential elections; given the make-up of people incarcerated in this country, that rule would increase turnout among minorities, who tend to vote Democratic.

A bigger gift to Democrats is the billions of dollars which would be made available in federal 6:1 matching funds for candidates who receive small donations. In past years, Democrats have typically hauled in more contributions of less than $200 than have Republicans.

H.R.1 is not only partisan, it is also poorly conceived. Small campaign contributions flow disproportionately to candidates at the ideological boundaries of their party, like Reps. Alexandria-Ocasio-Cortez (D-N.Y.) or Marjorie Taylor Greene (R-Ga.), who attract a lot of media attention. It is not clear that this element of the rule would favor Democrats, but most Americans might consider large-scale funding of party extremists against the best interests of the nation. David Keating, head of the Institute for Free Speech, called this aspect of H.R.1 “a subsidy for Congress’ most powerful, famous, and notorious members.”

So critical is this bill to Democrats that for the past three years it has been their top priority. Not infrastructure, not COVID relief; changing voter rules in ways that would favor their candidates has been their number one goal.

H.R.1 is so key to Democrats that Senate Majority Leader Chuck Schumer (D-N.Y.), who called it “so damn important” in a recent interview, has hinted that he might ditch the filibuster to get it passed.

Liberal groups such as the Brennan Center argue that we need H.R.1 to bring about “transformative change” that would strengthen our democracy and “racial justice.” But the group also acknowledges that in 2018 and 2020 we had the highest voter turnout in over a century.

The Brennan folks lament that “the most expensive campaigns in American history were still largely bankrolled by a small coterie of individual mega-donors and entrenched interests, many of whom were able to keep their identities secret from voters.”

Yes, so-called “dark money” played a large role in 2020… in favor of Democrats. In a lengthy piece about a Swiss billionaire who donated hundreds of millions of dollars in recent years to Democrat-backed causes, the New York Times recently noted, “During the 2020 election cycle, groups aligned with Democrats spent more than $514 million in such [dark] funds, compared to about $200 million spent by groups aligned with Republicans, according to an analysis by the Center for Responsive Politics.”

When Democrats rail about “dark money,” it is not the cash they want to prohibit, but the anonymity granted those who contribute to political groups. They know their backers on social media and in the media will be quick to shame those giving to conservative causes, and that publicly revealing donors to right-wing outfits will consequently staunch their funding.

A major boon to Democrats is that H.R.1 would allow ballot harvesting. People across the country would be allowed to designate any individual to return a ballot, as long as that person is not paid by the number of votes he harvests. Under the law, a harvester could legally scoop up hundreds or thousands of ballots from people in nursing homes or hospitals, for instance.

What a boon for Democrats, who can call on thousands of teacher union members to help collect those votes — votes they might even have a hand in creating. This is how Democrats seem to think we will strengthen our democracy.

More than 60 percent of Republicans think that Democrats stole the 2020 election. For Democrats to mandate procedures like ballot harvesting that Republicans view with suspicion will simply entrench the partisan divide that is damaging our nation.

Let us hope that moderate Democrats stand in the way of abolishing the filibuster and refuse to back H.R.1. Let’s hope they actually do something “For the People.”

LISTEN TO LIZ’S INTERVIEW BEGINNING AT 1:00:15 ON THE TODDCAST PODCAST BELOW: