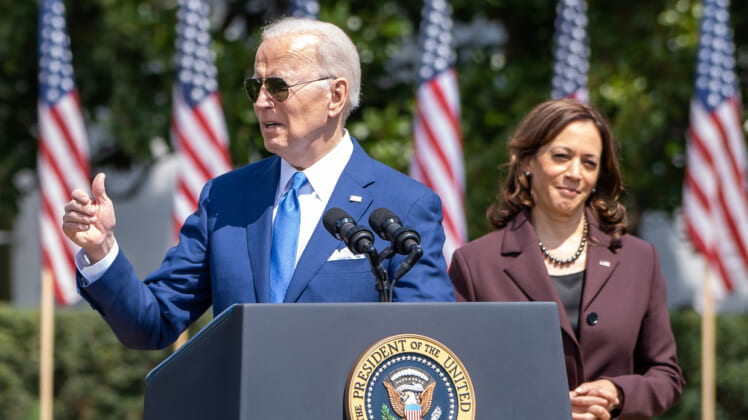 Joe Biden was darned lucky he chose Kamala Harris as his running mate. If he had teamed up with someone capable, someone who had won the trust of the country, Biden might be headed out to pasture. Good pick, Joe.

This is not, as Joe might say, hyperbole. Over the past few months, the president has shown himself not only confused but dangerously confused. At some point, Democrats dragged down by Mr. Biden’s poor performance would likely step in, demanding he resign. But then we would have Kamala Harris in the Oval Office, an outcome too dreadful to contemplate, even for Democrats.

Mr. Biden is a liability to the U.S. and to his party. His comments appearing to call for regime change in Russia or suggesting that U.S. GIs were soon to enter Ukraine played into Vladimir Putin’s hands and provided invaluable fodder for his propaganda machine.

Of course, it is not just about the Ukraine war that Mr. Biden has appeared confused about. Just recently, the president was asked about his plans to rescind Title 42, the health emergency measure that has allowed our government to rapidly expel people entering the U.S. illegally. Instead of addressing the border situation, Biden talked about the Department of Justice appealing a judge’s ruling that nixed the federal mask mandate on airplanes, conflating the two issues.

This was not because he didn’t hear the question; there was no Marine One helicopter hovering in the background. This was Mr. Biden, confused.

The steady stream of misstatements and contradictions has taken a toll. As have videos of Mr. Biden shaking hands with thin air or being awkwardly coached by his wife Jill to wave to a crowd.

As of February, 54% of Americans, according to an ABC/Washington Post poll, did not think Joe Biden had “the mental sharpness it takes to serve effectively as president.” Only 40% of the country thought he had what it takes. Imagine.

Imagine all that can go wrong during a two-hour phone conversation with Chinese ruler Xi Jinping. Or at a G-7 press conference, where he repeatedly confuses Libya and Syria. Our enemies are cheering.

Democrats know that Mr. Biden is a liability, not only in the upcoming midterm elections but also heading into the next presidential contest. Mr. Biden thinks he will run again in 2024; he recently affirmed that intention to Barack Obama.

To be clear, his own party will make sure that never happens, as he would almost certainly drag his party down to defeat. If they could, they would surely convince him to step aside after the midterms. But they cannot; that would leave Kamala Harris in the Oval Office, and she might prove even more disastrous to Democrats.

Astoundingly, Ms. Harris’ approval ratings are even worse than those for Joe Biden. Her performance on the jobs assigned to her, managing illegal immigration and overseeing the White House’s pitch for voting rights, for example, has been deplorable, and anything but serious.

In numerous speeches, she sounds demented and is tone-deaf to her own ill-scripted rambling. In one, she talked about the “significance of the passage of time” four times in fewer than 30 seconds.

Meeting recently with the Jamaican Prime Minister, Ms. Harris said, “… just as it has been in the United States, for Jamaica, one of the issues that has been presented as an issue that is economic in the way its impact has been the pandemic.” And, further, “we will assist Jamaica in COVID recovery by assisting in terms of the recovery efforts in Jamaica that have been essential to I believe what is necessary to strengthen not only the issue of public health, but also the economy.”

It isn’t just Ms. Harris’ inscrutable word salads or task failures that have tarnished her standing, it is also that she is apparently an unpleasant boss who oversees a toxic workplace environment. Her chief of staff Tina Flournoy just recently decamped, the most recent in a series of defections by highly-placed staffers who can no longer tolerate what one source told Politico was an “abusive environment.”

Despite Joe Biden’s disastrous performance and polling, few imagine that Democrats will pull the plug and demand that he step down. That would leave Kamala Harris in the driver’s seat heading into 2024, a prospect few would welcome. She flopped as a primary candidate in 2019, garnering little support even in her home state of California, and even among black voters. Most likely she would flop again. For the moment, at least, Joe Biden is safe.