Liz Peek: How Biden Can Get Upper Hand Against Putin 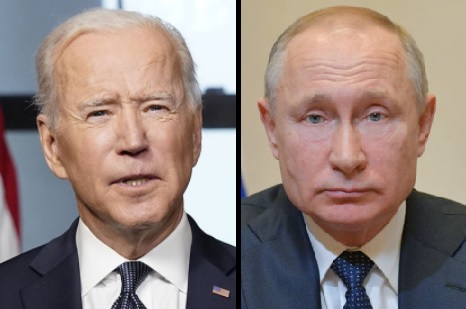 He especially wants to show the world just how tough he can be on Russian President Vladimir Putin, whom he has called a “killer,” and on whose regime he has recently imposed a second round of sanctions in as many months.

Unhappily, Biden’s effort to stand up to Russia’s leader has so far been a flop and an embarrassment.

In his second telephone conversation with Putin, Biden “made clear that the United States will act firmly in defense of its national interests in response to Russia’s actions, such as cyber intrusions and election interference.”

Tough talk, but Biden ended the conversation with a surprise (and inappropriate) invitation to a summit. A summit that Putin has so far declined to accept, even as he continues to mass troops along the Ukraine border and block seaways to that nation.

This repudiation of Biden’s ill-prepared offer to meet with the “killer” Putin is humiliating. As is Biden’s decision to recall two U.S. warships that had been en route to the Black Sea as a show of force. Putin barked, warning the U.S.to stay clear of the area “for their own good,” and Biden blinked.

If Biden actually wants to get tough with Putin – if he is serious about punishing the Kremlin – he should do everything possible to ramp up U.S. oil production and to encourage more liquefied natural gas (LNG) exports. Such measures would cripple Russia’s financial clout and bolster America’s influence. But – my guess – Biden is too weak to confront the climate zealots who dominate the Democratic Party.

Oil and natural gas production account for nearly 40 percent of Russia’s total output. In recent years the country’s economy has been slammed by declining oil prices, driven lower largely by an unexpected rise in U.S. production, thanks to fracking and more recently the encouragement of the Trump White House.

Spurring the decline was Russia’s decision not to join other big OPEC + producers in cutting output to bolster prices. They could not afford to do so, but their choice was a drastic mistake.

Thanks to COVID and to sinking oil prices, Russia’s PMI dropped last year to the lowest level recorded since 1997, when the series was first compiled. The downturn led to towering unemployment; meanwhile, the fiscally strapped government was forced to delay large-scale spending meant to boost Putin’s approval ratings.

Some 40 percent of Russia’s state budget comes from its oil and gas revenues. In late May, the Wall Street Journal reported, “Russia’s fiscal relief program totals around 2.8% of GDP whereas the U.S. measures make up around 11%, according to the International Monetary Fund.”

As a result of the hardship, Putin’s approval rating slipped, from a high of 89 percent in 2015 (keep in mind this is Russia) to 69 percent in February of this year.

While most western leaders would celebrate such high polls, for Putin, who regularly receives admiring reviews from 80% or more of Russia’s population, the slide is worrisome.

Biden could keep pressure on global oil prices by backing increased U.S. output. He could also limit Russia’s influence and revenues by fast-tracking our LNG exports. Instead, he and his Democratic colleagues are eager to drive down U.S. fossil fuel production, sacrificing a critical geopolitical advantage on the altar of climate change.

One of Biden’s first executive orders was to suspend issuing new leases on federal lands, to end what liberals consider fossil-fuel “subsidies” (actually tax policies similar to those enjoyed by manufacturers) and to prevent oil companies from drilling in Alaska’s Arctic National Wildlife Refuge. Further, Biden has committed to bar drilling on 30 percent of federal lands and water by 2030. He also put an indefinite hold on granting permits for drilling on federal lands, even in those cases where oil companies hold valid leases.

Oil companies had feared such measures from the Biden administration, and stockpiled drilling permits just in case. Consequently, the impact from the suspension will not be felt immediately.

But, taken together, along with efforts to make it more difficult for energy companies to secure financing, U.S. production will inevitably suffer, which, of course, is the point.

Federal lands produce roughly 22 percent of overall U.S. oil output and 12 percent of our natural gas. Some of the wells on these lands are old; that production will not be much impacted.

But wells produced through fracking typically have shorter lives than conventionally drilled wells and need ongoing investment to maintain output.

Overall, the American Petroleum Institute estimates that Biden’s ban on new leases will cause, by 2030, offshore natural gas production for natural gas to decrease by 68 percent and oil production to drop 44 percent.

Moreover, the pro-oil group forecasts that U.S. oil imports from foreign sources would increase by 2 million barrels a day by 2030, costing the U.S. roughly $500 billion annually. These trends will help boost oil prices, and Russia.

Rather than impose constraints on U.S. energy production, Biden can and should ignore the climate fanatics in his party and help push our oil and gas output higher. That would be good for U.S. consumers and good for growth.

Best of all, it would be good for Biden. Maybe then Putin will take him seriously.