Liz Peek: The Odds of Kamala Harris Ever Being Elected President Shrinking Every Day 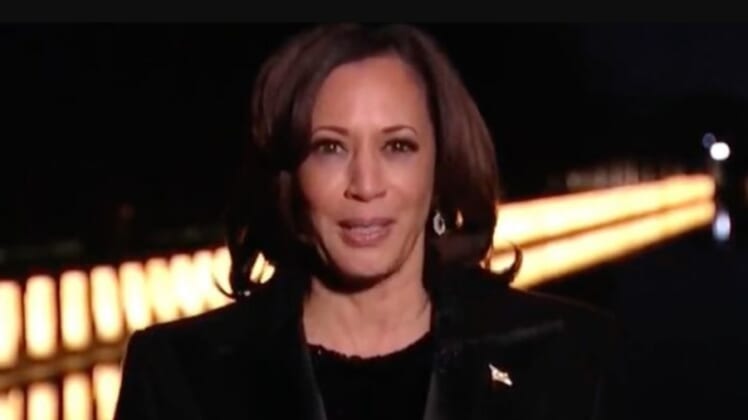 The odds of Kamala Harris ever being elected president are shrinking faster than a Creamsicle in August.

As she likely anticipated, tying her to the border disaster was almost sure to be a losing proposition for the vice president.

Americans are not happy that more than 6,000 people per day are entering our country illegally thanks to President Biden’s determination to destroy his predecessor’s legacy. They are especially displeased that thousands of undocumented people – many apparently sick with COVID-19 – are being shipped into towns and cities across the country, with no federal support to care for them. And, yes, they are angry that more than 20,000 unaccompanied children are being housed in terrible conditions, all because Biden couldn’t resist undoing President Trump’s successful efforts to staunch the flow of migrants into our country.

It almost seems as though Biden’s team was purposefully playing a dirty trick on Harris. Was she just a tad too pushy? A little too assertive? Did Biden’s repeated invocation of “President Harris” go to her head?

Saddling her with the border fiasco not only put her at risk politically (and especially in a toss-up border state like Arizona) but added insult to injury, since her boss denied her the job she reportedly wanted: overseeing the monster $1.9 trillion American Rescue Plan. After all, she apparently argued, managing the $800 billion stimulus plan is what then-Vice President Biden did in 2009 for President Obama. Why didn’t she get to star in the Greatest Democratic Giveaway of all time?

Imagine the glory of handing out $123 billion to K-12 schools (aka the teacher unions), no strings attached, or sending tens of millions of dollars to “environmental justice grants,” which will surely be guided by wildly discretionary assessments, or $362 billion to fiscally parched cities and states, all of which will come knocking on the administrator’s door?

Imagine being on the giving end of $1,400 checks going to 85 percent of all Americans, employed or unemployed.

That, ladies and gentlemen, is a dream job.

By contrast, overseeing the chaos at the border is no fun at all. Mainly because the Biden team has no clue what to do.

Still, Harris could have taken up the job seriously, assuming responsibility for a problem extremely important to the White House. President Biden’s polls are just okay, not the rave reviews he so clearly craves, and the biggest negative ratings come from how he is handling the border. Harris could have helped with that.

How? First, by appearing even the slightest bit interested. Critics have complained that she has not once visited the border. It’s a fair complaint — why hasn’t she?

Yes, it might have meant more scrutiny. The Biden administration, despite promises to be the most transparent White House in history, imposed a media blackout of immigration activities and facilities in the region, restricting coverage. If Harris were to visit, a few more cameras would be trained on the disorder; a few more reporters from the liberal media might have to acknowledge that America is being inundated by people streaming north from Mexico and Central America. But it would have shown some level of engagement.

Not only has she not appeared in Texas or Arizona border towns, she dismissed the very notion of making that trek with a signature guffaw, as though the reporter asking her if she planned to visit was surely joking. He was not.

Second, she should have traveled quickly to the three Central American countries most often mentioned as the wellspring of all those immigrants – Guatemala, El Salvador and Honduras – and immediately asked for help. She could have dangled money, good relations, import policies, whatever else the White House could trot out to get their attention, and insisted they use local militaries and police to close their borders.

Perhaps she was nervous that leaders of those countries would echo criticisms lodged by Guatemala’s President Alejandro Giammattei. He claimed Biden’s “confusing” messages that migrant children would be welcomed by the U.S. encouraged the caravans. Or that reporters would hear comments like those delivered by Mexican President Obrador, who said that Biden had raised expectations that people would be let into the U.S.

Instead of making an in-person plea for help, Harris held a virtual meeting with the Guatemalan president and has a call with Obrador scheduled for May 7, a follow-up from an earlier call in which they agreed to hold another call to discuss the “root causes” of immigration. Meanwhile, El Salvador’s president recently refused to meet with a Biden envoy, claiming he is offended by criticism of his government. This is not going well.

Harris just recently promised an additional $310 million to Central America “for humanitarian relief and to address food insecurity,” as though chronic corruption, gang violence and poverty can be tamed with cash. In response to criticisms, she now says she plans to visit the region in June, claiming in an interview, “I can’t get there soon enough.”

This is ludicrous. Every day that Harris dithers, more children are put at risk at the hands of gangs and coyotes, more U.S. cities and towns have indigent strangers dropped helplessly into their midst and anger about President Biden’s reckless dismantling of Trump’s successful border policies grows.

Though the Biden administration has attempted to distance Harris from the humanitarian and security crises at the border, most Americans see her as the point person. That may explain a recent survey that finds 35 percent of respondents viewing her “very unfavorably” compared to only 26 percent that see her “very favorably.”