Todd Starnes Explains How Hillary Clinton Could Become President BEFORE 2024 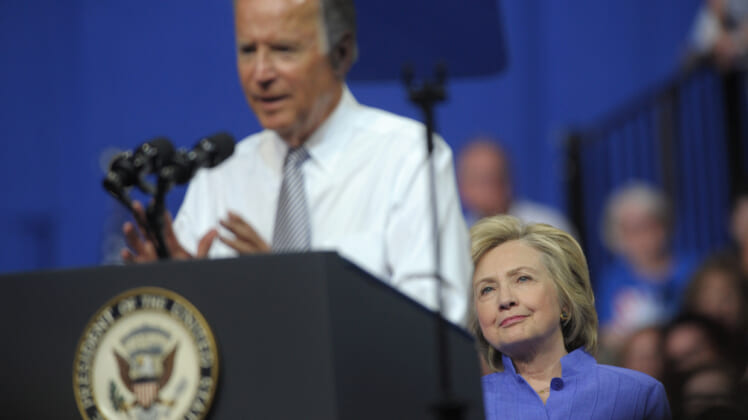 “I would be willing to say and go out on a limb and suggest that it’s if that happens, it could very well be Hillary,” Starnes said. “Harris gets the boot. Hillary steps in. And guess what happens? Biden resigns. And guess who becomes the president of these great United States?”

Then 2024 could become a rematch of 2016, Clinton against former President Trump once again.

LISTEN TO TODD STARNES DISCUSS THE POSSIBILITY ON THE TODDCAST PODCAST:

Below is a rushed transcript of Todd Starnes discussing the possibility of Hillary Clinton becoming president before 2024:

Starnes: [00:52:40] All right, folks, welcome back to the Todd Starnes Radio Show. So last night, my good friend Chad Pergram over at Fox News Channel. He is a congressional correspondent. The guy’s been up on Capitol Hill for a long time has done some great journalism. He’s not an opinion guy, he’s a journalist, and he’s he’s the real deal. And his sources are impeccable. So when I heard this story and we’ve got the video, we’ve got the story up at ToddStarnes.com. When I heard what Pergram was reporting. It caught my attention. So Pergram says that there are rumblings on Capitol Hill that Joe Biden is secretly plotting to remove Kamala Harris from office. Let’s take a listen. [00:53:26][46.3]

Pergram: [00:53:27] So I got a message recently from someone who knows Capitol Hill very well, and they suggested I should familiarize myself with the process to confirm a vacancy for the vice president in the Senate and in the House. [00:53:40][13.3]

Starnes: [00:53:41] Now this is a big deal because that particular position, the vice office of the vice president, does require both approval from the Senate and the House. There’s something going on here. There’s massive bad blood and my theory is this is coming from Joe Biden’s wife, Dr. Mrs. First Lady Jill Biden. She hates Kamala Harris. There has been bad blood there for a long time, going back to when Harris accused Biden of being a racist during the presidential debates. So this has been festering for a long time. And I am I would not be surprised if if Harris is given the heave-ho now, here’s where this is going to get fascinating. If that happens, it’s got to happen before the midterm elections because if the Republicans retake the House and the Senate, which, by the way, they’re everybody’s projecting a massive Republican landslide in the midterms. That means they don’t have long if they’re going to make a change.

Now the question is who becomes vice president if Harris gets the boot? If you are asked if and again, I’m not a betting man, but if I was putting down, I don’t know, some Chick-fil-A sandwich, I would bet it would either be Hillary Clinton or Transportation Secretary Pete Buttigieg. Those are my two choices. I would be willing to say and go out on a limb and suggest that it’s if that happens, it could very well be Hillary.

And here’s the problem the Democrats are facing a leadership vacuum right now. Biden is not a leader. Biden doesn’t even know what day of the week it is. He is not a leader. There is a leadership vacuum. They could be going into 2024 and and Biden won’t be running. Harris won’t be running. They’ve got no leadership. It might very well be possible that Hillary Clinton could be that person. Harris gets the boot. Hillary steps in. And guess what happens? Biden resigns. And guess who becomes the president of these great United States?

Just think about it for a minute. It makes sense when you step back and use, you sketch all of this out. It makes sense because the Democrats are in a tailspin right now. And if you don’t believe that, just look at the ratings. Kamala Harris, we’re talking 10 months into the job. Her approval rating is at 28 percent. 28 percent. That’s according to USA Today and Suffolk University. And all of the pundits are starting to speculate now about the future of Kamala Harris. Is it Kamala or Kamala, I never can remember which one of them is racist, is that Kamala? Is Camilla the racist Campbell? I think it’s Kamala Harris. All right, so all right, that’s one we’ll use that drives the Liberals nuts. But the problem here is that Kamala Harris is a very unflattering person, she is not she doesn’t have good people skills. She’s just not a people person. And that’s a big problem because she’s been a people person job. And that here is how bad it is. People are leaking. People under Biden are leaking stories about Kamala Harris to the mainstream media and specifically to CNN. And that’s what’s brilliant about all of this. It’s not Fox News breaking all these stories. It’s not Newsmax. It’s MSNBC, it’s CNN, it’s the New York Times. So we need to pay very close attention here, folks. It could get very interesting, very quickly. And if nothing else, I suspect, depending on who Biden picks, we’ll figure out who’s actually running things at 1600 Pennsylvania Avenue. And it’s not who Biden picks, it’s who Biden announces. Somebody else is doing the picking. [00:57:58][256.5]