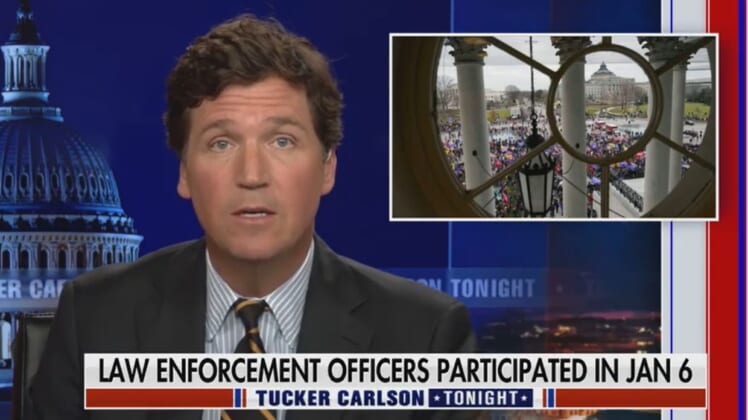 WATCH PART OF TUCKER’S MONOLOGUE BELOW:

And speaking of January 6th, why are there still so many things, basic factual matters, we don’t know about that day? Why is the Biden administration preventing us from knowing? Why is the administration hiding more than 10,000 hours of surveillance tape from the U.S. Capitol? What could possibly be the reason for that? Even as they call for more openness. We need to get to the bottom of it. They could release those tapes today, but they’re not. Why?

We ought to be asking those questions, urgently. Because as the attorney general reminded us, a lot depends on the answers. At least one news organization is. Revolver.news is a new site and turned out to be one of the last honest outlets on the internet. A new piece on the site suggests an answer to some of these questions. We know the government is hiding the identity of many law enforcement officers who were present at the capitol on January 6, not just the one who killed Ashli Babbitt. According to the government’s own court filings, those law enforcement officers participated in the riot. Sometimes in violent ways.

We know that because, without fail, the government has thrown the book at most of the people who were in the Capitol on January 6. There was a nationwide dragnet to find them. Many of them are still in solitary confinement tonight. But, strangely, some people who participated in the riot haven’t been charged. Look at the documents. The government calls these people “unindicted co-conspirators.” What does that mean? It means that in potentially every case, they’re FBI operatives.

For example, one of those “unindicted co-conspirators” is someone the government identifies only as “Person Two.” According to those documents, “Person Two” stayed in the same hotel room as an “insurrectionist” named Thomas Caldwell, who’s alleged to be a member of the group called the Oath Keepers. “Person Two” also “stormed the barricades” at the Capitol on January 6, alongside Thomas Caldwell.

The government’s indictments further indicate that Caldwell — who by the way is a 65-year-old man — was led to believe there would be a “quick reaction force” also participating in January 6. That quick reaction force, Caldwell was told, would be led by someone called “Person Three” — who had a hotel room and an accomplice.

But wait. Here’s the interesting thing. “Person Two” and “Person Three” were organizers of the riot. The government knows who they are, but the government has not charged them. Why is that? You know why. They were almost certainly working for the FBI. So FBI operatives were organizing the attack on the Capitol on January 6, according to government documents. And those two are not alone.

In all, Revolver News reported that there are,  quote, “upwards of 20 unindicted co-conspirators in the Oath Keeper indictments, all playing various roles in the conspiracy, who have not been charged for virtually the exact same activities — and in some cases much, much more severe activities — as those named alongside them in indictments.”

Huh? So it turns out this white supremacist insurrection was, again, by the government’s own admission in these documents, organized, at least in part, by government agents.