About That “Send Her Back” Chant – It’s a Political Rally, Not a Church Service 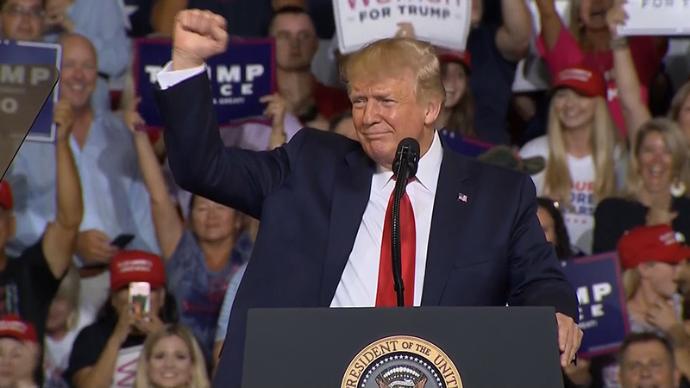 UPDATE: President Trump has distanced himself from the “Send her back” chant at his rally in North Carolina. The president said he was not happy with the chant.

President Trump held a rally in eastern North Carolina Wednesday night and the crowd turned out not to be big fans of “The Squad” – especially Congresswoman Ilhan Omar.

Almost on cue, the Mainstream Media and the Never Trumpers came down with a raging case of Trump Derangement Syndrome. Even a number of conservative pundits piled on – including Ben Shapiro.

Vile. Omar is awful. She is a radical anti-Semite with terrible views. She is also an American citizen and chanting for her deportation based on her exercise of the First Amendment is disgusting. https://t.co/Y4nzHPzba4

Though it was brief, I struggled with the “send her back” chant tonight referencing Rep. Omar. Her history, words & actions reveal her great disdain for both America & Israel. That should be our focus and not phrasing that’s painful to our friends in the minority communities.

The Mainstream Media accused the president’s supporters of being racist and and fascist and un-American.

Omar is Ashamed of America

Quite frankly, I thought the crowd’s reaction was an appropriate response to the incessant un-American rage spewing from the mouth of Rep. Omar, known for her anti-Semitism.

She recently said she was ashamed of our nation. She told high school students we are an unjust people. She once advocated on behalf of ISIS recruits. And she characterized the carnage of the September 11, 2001 terrorist attacks as “some people did something.”

Politics in the 21st century has become something of a contact sport — and campaign rallies have turned into the political version of a Super Bowl.

The rallies are packed with die-hard fans wearing team swag, waving banners and chanting slogans. The fans cheer for their guy and the heckle the opposition.

So to all of you Democrats and Never Trumpers and fair weather conservatives – spare me the fake outrage and self-righteous puffery.

Last night was a political rally – not a church service.