Air Force Threatened to Expel Cadets Who Refused the Jab 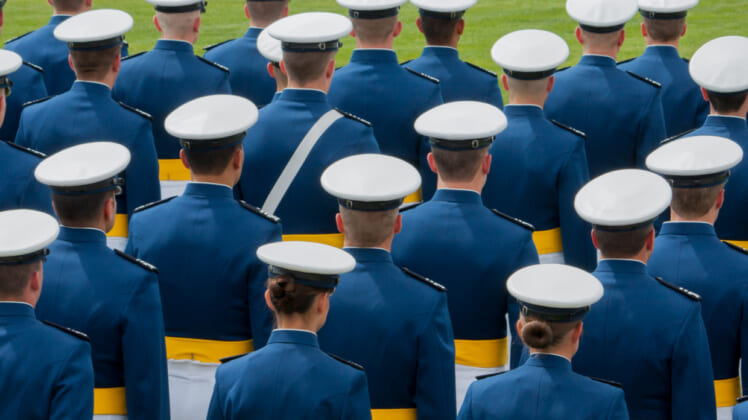 Air Force Academy cadets are being threatened with expulsion and possible back pay of $200,000 in tuition for refusing to get the COVID vaccine.

Four seniors at the U.S. Air Force Academy in Colorado may not be able to graduate later this month after getting a letter of reprimand, The Gazette reports.

Todd’s new book makes a great addition to your library — Culture Jihad: How to Stop the Left From Killing a Nation. Available right now at ToddStarnes.com.

Each filed for a religious exemption but was denied.

Spokesman Lt. Gol Brian Maquire said they can get the vaccine before the May 25 graduation or “face consequences for disobeying a lawful order.”

The Air Force Academy is the only military academy banning cadets from graduating because they are unvaccinated, the Associated Press reports.

Gordon Klingenschmitt, a chaplain and leader of The Pray in Jesus Name Project, led a protest Saturday outside the academy near Colorado Springs.

“As a chaplain, I defend people’s religious freedom,” Klingenschmitt, a former state representative told the outlet.

“These are evangelical Christian cadets, who are pro-life, and they object to the fact that the vaccines were tested on aborted fetal stem cell lines. Because of their objection to abortion, their conscience will not let them … inject this particular drug into their own bodies,” he explained.

Klingenschmitt told Fox News the academy’s superintendent, Lt. Gen. Richard Clark, went back on a promise he made to advocate for religious exemptions.

“I interviewed the 3-star general superintendent Richard Clark at my class reunion in September… on stage, before eyewitnesses, on video he said ‘absolutely, I’ll protect religious freedom, I’ll defend the Constitution for my cadets who have a religious objection.’ Now he has broken his word,” he said.