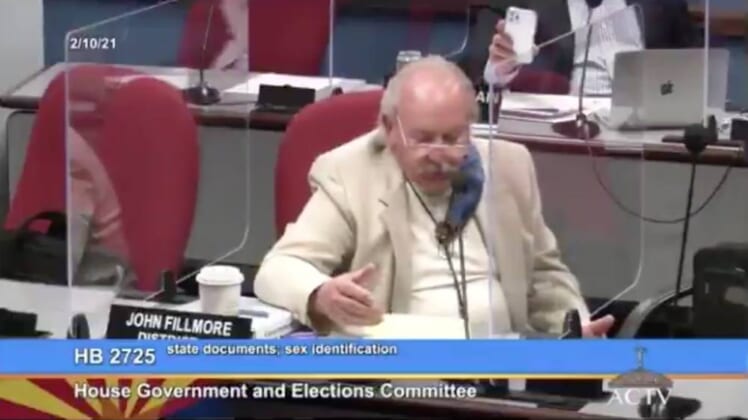 An Arizona state representative is facing backlash after comparing nonbinary (neither male nor female) identities to people who’d someday identify as a chicken, Business Insider reports.

“I don’t believe that we as a society should have all of the different binaries identified,” Arizona Republican State Rep. John Fillmore said during a committee meeting in February discussing his proposed bill which would aim to limit gender identification options on state documents.

“What’s going to happen when someday someone wakes up and they want to go to a far extreme and identify as a chicken or something for crying out loud?” Fillmore continued. “Where do we draw the line?”

One mom tweeted that she was “shaking after an elected GOP state rep just compared my non-binary child to a barnyard animal.”

An ethics complaint was filed against Filmore, which he said has no merit.

“Representative Fillmore continuously made discriminatory and harassing comments during public testimony and in his response compared members of the LGBTQ+ community to farm animals,” the complaint reads, according to KPNX.

“Are we going to deny them that right?” he asked on the Todd Starnes Radio Show.

“He does raise a good point. If, in fact, you get to decide what you identify as, how many kids growing up would say, ‘Mommy, I want to be a horse,’” Starnes said.

“The point here is, ladies and gentlemen, what if you have a 3-year-old, a little boy, who says, ‘Mommy, I want to be a girl,’ and the next thing you know mommy is carting the kid off to the doctor to get Lord-knows-what chopped off,” he concluded. “Nobody wants that, so maybe, just maybe, you can step back and just think this stuff through, but this is the world we live in right now, folks, and it’s bizarre.”