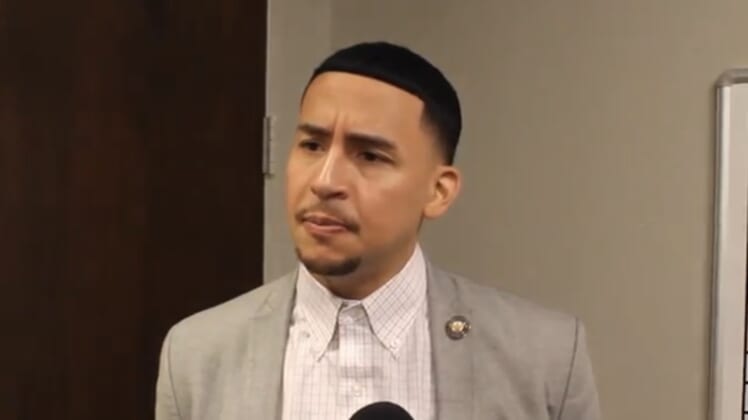 An Atlanta politician, who voted to defund the police by $73 million, was the victim of a car theft Wednesday, according to the report he filed with the Atlanta Police Department.

Atlanta city councilman and mayoral candidate Antonio Brown was at a ribbon-cutting ceremony in Northwest Atlanta when four kids between the ages of 6 and 12 reportedly stole his car.

Brown told FOX 5 he turned off his white Mercedes coupe, which has a keyless start, stepped out of the car to talk to community leader Ben Norman and was only a couple of feet away from his vehicle.

The councilman told police he noticed the youngsters, one of which had a toy, walking around a store. The next second, they were driving off in his Mercedes.

“You don’t immediately think, ‘Oh, these kids are going to steal my car,’” Brown told The Atlanta Journal-Constitution.

Despite his efforts to stop young thieves, the mayoral hopeful was dragged about a block down the road before letting go.

“As he started to speed up, and I knew that if I had let go, I knew I probably could have killed myself because he was going so fast, I would have started to tumble,” Brown added.

Brown filed a report with the Atlanta Police Department, and officers found the vehicle hours later but did not say if they made any arrests, according to reports. Brown said he does not want to press charges against the minors, claiming the kids acted out of desperation.

“The reality is this: We need programmatic initiatives in place to help support these kids to be able to give them another pathway instead of them committing crimes,” Brown said.

“This man, based on that statement, should hand over the keys of his Mercedes to those children,” the Todd Starnes Radio Show host told his listeners. “Here’s how bad it is in Democrat-controlled Atlanta. Six-year-olds are carjacking and it’s not their fault.”

Brown, who is running on a campaign of “reimagining public safety and policing in Atlanta,” voted in favor of an ordinance to withhold $73 million of the Atlanta Police Department’s budget until Mayor Keisha Bottoms’ administration drafted a plan to reinvent the city’s culture of policing, The Atlanta Journal-Constitution reported. It was narrowly voted down.

Brown is under indictment on federal fraud charges from 2019.

LISTEN TO TODD STARNES DISCUSS THE STORY BELOW ON THE TODDCAST PODCAST: