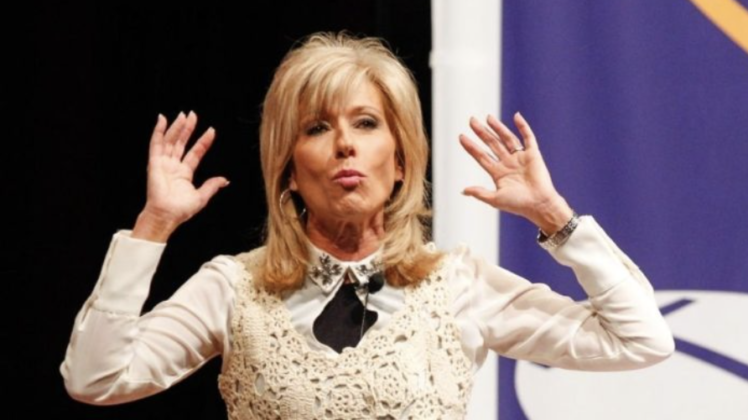 Beth Moore, the Southern Baptist Bible teacher who is not exactly a fan of President Trump, was trending on Twitter earlier today.

Mrs. Moore, who allegedly voted for a third-party candidate in 2016, has spent the last four years casting stones not only at President Trump, but also his Evangelical Christian supporters.

It’s been an ugly business within the church world watching Never Trump Pharisees casting judgment on any of us who dared to embrace the concept of making America great again.

On Sunday, Mrs. Moore unleashed even more anti-Trump venom on her Twitter feed — blasting what she called “Trumpism.”

“I do not believe these are days for mincing words. I’m 63 1/2 years old & I have never seen anything in these United States of America I found more astonishingly seductive & dangerous to the saints of God than Trumpism,” she wrote.

A working definition of “Trumpism” would’ve been nice, but I think we all understand that it’s not meant to be flattering.

“This Christian nationalism is not of God. Move back from it,” she demanded. “Fellow leaders, we will be held responsible for remaining passive in this day of seduction to save our own skin while the saints we’ve been entrusted to serve are being seduced, manipulated, USED and stirred up into a lather of zeal devoid of the Holy Spirit for political gain.

You know, there’s a fine line between being a Bible study leader and a propagandist for the Left.

“And, God help us, we don’t turn from Trumpism to Bidenism. We do not worship flesh and blood. We do not place our faith in mortals. We are the church of the living God. We can’t sanctify idolatry by labeling a leader our Cyrus. We need no Cyrus. We have a king. His name is Jesus,” she wrote.

I was taken aback by her assertion that we should move back from the great good that Trumpism has brought to our nation.

Does Mrs. Moore take issue with President Trump providing financial aid to historically black colleges and universities? Does she take issue with the president protecting small business owners who simply wish to follow the teachings of Christ in their businesses?

Mrs. Moore did not provide any specifics. She just issued a blanket condemnation of President Trump and by extension all of us gun-toting, Bible-clinging Deplorables.

Don’t get me wrong. I believe Mrs. Moore and all the other Never Trump Evangelicals have every right to their opinion.

I remember when a Southern Baptist leader once compared evangelical Trump supporters to a television evangelist who cheated on his wife by sleeping with a whore in a seedy motel.

I told you it’s been an ugly business over these past four years.

But I find it very peculiar that these same people were noticeably quiet during the pagan years of the Obama Administration. And most recently with the salacious scandals unfolding around Joe Biden.

I’ve often wondered, though, if much of the Never Trump Evangelical angst has been more about politics and less about the pew?

I have managed to find some common ground with Mrs. Moore. I, too, do not believe in mincing words.

Some might argue that Never Trump evangelicals who cloak their leftist political beliefs in a biblical narrative might be even more seductive and dangerous to the Saints of God.

I do not believe these are days for mincing words. I’m 63 1/2 years old & I have never seen anything in these United States of America I found more astonishingly seductive & dangerous to the saints of God than Trumpism. This Christian nationalism is not of God. Move back from it.