Biden Reportedly Violated THESE Royal Protocols During Visit with the Queen 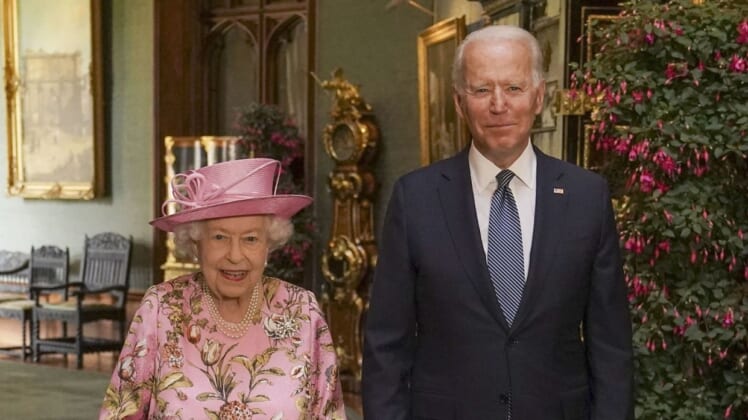 President Biden is under fire for violating royal protocol during his meeting with the Queen, according to media reports.

Amid several gaffes and missteps at the G-7 Summit, Biden failed to take off his sunglasses when he greeted the monarch at Windsor Castle, and then went on to spill the tea about his meeting with the Queen, a royal faux pas.

“We had a great talk,” Biden told media at Heathrow Airport of their Sunday meeting. “She wanted to know what the two leaders that I … the one I’m about to meet with, Mr. Putin, and she wanted to know about Xi Jinping, and we had a long talk, and she was very generous.”

Although Biden was not sniffing the Queen’s hair, he did spill her tea publicly — a definite no-no, according to royal experts.

“The Queen is supposed to have told Michelle Obama that royal protocol was rubbish. It has nonetheless been a rule that an audience with the Queen is strictly private and to reveal its contents is a breach of trust,” royal commentator Richard Fitzwilliams told the Daily Mail.

“President Biden, by revealing that the Queen had asked about the Russian and Chinese leaders, did breach this rule. It is very possible that, as the G7 sees itself as a bulwark of democracy against regimes such as Russia and China, that this comment may have been prearranged in line with this theme,” he added.

Grant Harrold, a former butler to Prince Charles and Camilla, said Biden should’ve ditched his shades instead of waiting until halfway through the ceremony.

“​If you’re meeting the Queen face-to-face, there’s no sunglasses or anything like that at all because eye contact is quite important with any introduction​,” Harrold told Newsweek.

“​It’s fine for Biden to have had sunglasses on but he should have removed them when he actually met the Queen. Everyone else has to, it doesn’t matter who you are, even royals remove sunglasses when they meet royals​,” he added. ​