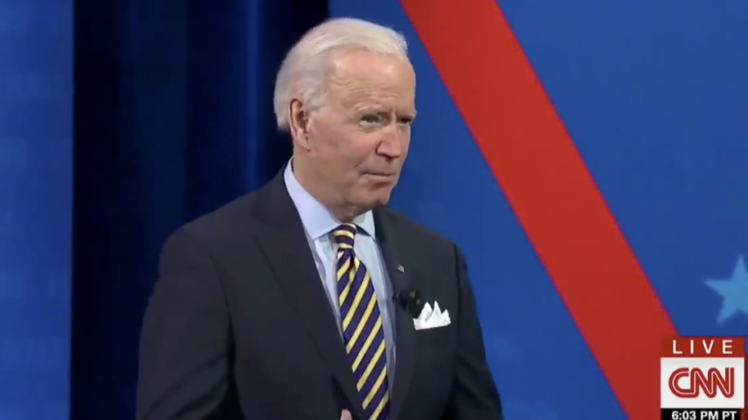 President Joe Biden spoke at length about the challenges of getting coronavirus vaccines where Black Americans can best receive them, saying at a CNN town hall that his administration is prioritizing mobile vaccine clinics, community health centers and pharmacies in what he called “the toughest neighborhoods in terms of illness.”

“The other thing is, a lot of people don’t know how to register,” Biden said during the CNN town hall in Milwaukee. “Not everybody in the community, the Hispanic and the African American community, particularly in rural areas that are distant and in inner-city districts … know how to use, know how to get online and determine how to get in line for the covid vaccination,” Biden said. “So we’re committed to spend a billion dollars on public education to help people figure out how they can get in.”

Imagine the outcry had President Trump said something like that. But CNN host Anderson Cooper just ignored Biden’s ignorance.

It’s not the first time Biden has made racially charged comments. During the presidential campaign he told a black radio host Friday that “if you have a problem figuring out whether you’re for me or Trump, then you ain’t black.”

The campaign dismissed the remark as a joke — but still – he said it.

Here’s a look at past controversies over Biden’s comments:

September 2020: “Some Black woman was able to stack the grocery shelf”

Biden landed in hot water over a viral clip of him suggesting why people were able to quarantine during the coronavirus pandemic.

“They’re saying, ‘Jeez, the reason I was able to stay sequestered in my home is because some Black woman was able to stack the grocery shelf,'” Biden is heard saying in the clip.

In an interview with “The Breakfast Club,” the presumptive Democratic nominee told host Charlamagne tha God, “I tell you if you have a problem figuring out whether you’re for me or Trump, then you ain’t black,” before defending his record with the black community.

At a campaign event in Iowa, Biden told supporters “poor kids are just as bright and talented as white kids.” He quickly corrected himself after some applause by adding: “Wealthy kids, black kids, Asian kids.”

While discussing the need for criminal justice reform at a luncheon last year, Biden said people must continue to work to recognize black as equals so that African American mothers, like the mother of Trayvon Martin who was shot by a neighborhood watch volunteer in Florida in 2012, no longer have to fear their sons will be shot when they go outside.

“We’ve got to recognize that the kid wearing a hoodie may very well be the next poet laureate and not a gangbanger,” Biden said.

Biden quickly drew criticism for his use of the word “gangbanger.” Former presidential candidate Cory Booker said Biden “needs to have the language to talk about race in a far more constructive way.”

Biden was slammed by fellow Democrats after invoking his ability decades ago to work with two segregationist southern senators to “get things done.”

Biden brought up the names of Sens. Eastland of Mississippi and Herman Talmadge of Georgia while speaking at a fundraiser Tuesday in New York City. Eastland and Talmadge, two senior members in the Senate when Biden arrived in the chamber in 1973, were firmly opposed to desegregation efforts.

“I was in a caucus with James O. Eastland,” Biden said as he briefly imitated the late senator’s southern drawl. “He never called me boy. He always called me son.”

But discussing the “civility” in the Senate during the 1970s, Biden said: “Well guess what? At least there was some civility. We got things done. We didn’t agree on much of anything. We got things done. We got it finished. But today, you look at the other side and you’re the enemy. Not the opposition, the enemy. We don’t talk to each other anymore.”

“He said in the first 100 days, he’s going to let the big banks once again write their own rules,” Biden said. “Unchain Wall Street! They’re gonna put y’all back in chains.”

February 2007: Obama is “the first mainstream African-American who is articulate and bright and clean”

Biden, while running for the 2008 presidency, issued what he thought was praise of then-Senator Barack Obama, saying he was “the first mainstream African-American who is articulate and bright and clean.”

Biden apologized for the statement at the Democratic National Committee’s winter meeting. “I want to say that I truly regret that the words I spoke offended people that I admire very much,” he said.

2006: “You can’t go to a 7-Eleven or a Dunkin Donuts unless you have a slight Indian accent”

Biden, then a senator of Delaware, can be seen in a clip talking to a man who appears to be of Indian descent. “In Delaware the largest growth in population is Indian Americans,” Biden said. “You cannot go to a 7-11 or a Dunkin Donuts unless you have a slight Indian accent. I’m not joking.”