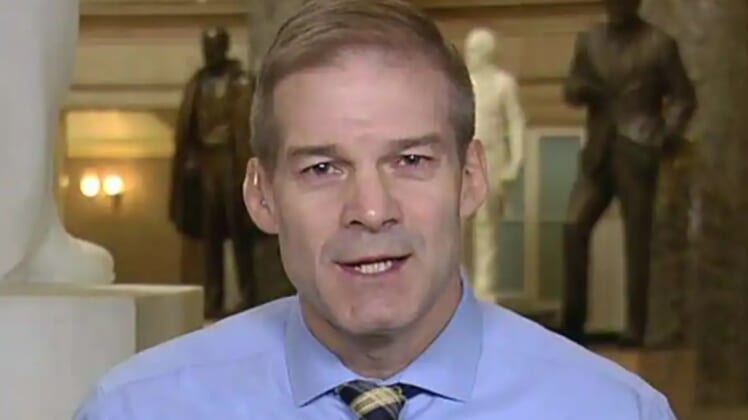 “It’s overwhelming. We were there last week. It is not a crisis, it is chaos,” the Ohio Republican said after touring a migrant facility in Donna, Texas, calling it “unbelievable” and “alarming” what this administration is doing.

Border Patrol agents report March was the largest, busiest month in this history of border patrol.

“The sad thing is it was totally avoidable if the Biden Administration had just kept in place the policies the Trump administration, President Trump had negotiated and were working,” Jordan explained.

He points to having asylum seekers remain in Mexico instead of staying in the U.S. while they wait for their cases to be heard.

“That policy, undoing that, and then announcing to the world you weren’t going to deport anyone and you were going to stop building the wall, that sent a message and now these numbers are just literally overwhelming,” Jordan said. “It is a chaotic situation and it could’ve been avoided but for the crazy decisions the Biden administration and the Left have implemented.”

When nationally syndicated radio host Todd Starnes asked the conservative lawmaker why Biden did that, Jordan said what the people on the ground told him.

“The head of the border union, a local sheriff, and some property owners, they said they think it’s intentional,” he said. “They think this administration is intentionally trying to flood the country with now what will be somewhere between 2 and 3 million, if it continues at the pace it’s currently on.”

Jordan praised Trump as “the most successful presidency in our lifetime” and questioned why fellow Republicans – including Rep. Liz Cheney (R-WY) and former GOP House Speaker John Boehner — would attack one another given the current climate.

“Every single institution is now controlled by the left,” Jordan concluded.

LISTEN TO THE FULL INTERVIEW WITH REP. JIM JORDAN BEGINNING AT 1:16:00 ON THE PODCAST: