Charlie Kirk is Recruiting One Million Students For Trump 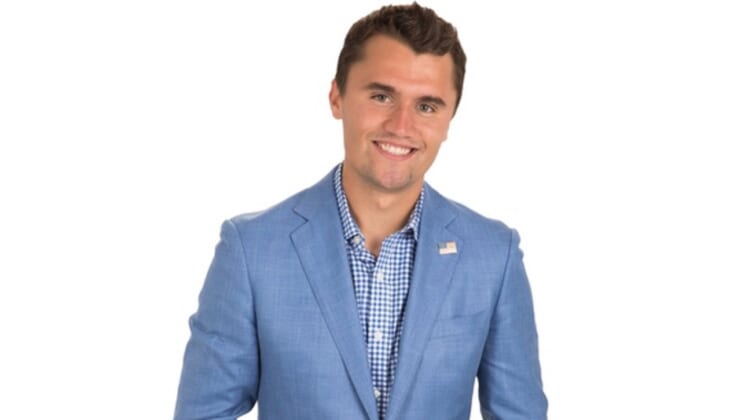 TODD:  I’m not sure that Charlie Kirk gets a lot of credit for what I’m about to say, but he really does deserve credit for helping to elect President Trump. I mean this guy – he’s a force to be reckoned with. The founder of Turning Point USA and Charlie single-handedly mobilized young American voters to get out and support this president. And it really is just a remarkable thing to see the work that he’s done. Charlie, great to have you on the show. Hope you’re doing good today.

TODD: You know, I run into you in some of the most random places. One minute it’s in the hallway here at Fox News or at Trump Hotel in that beautiful lobby. I mean, you’re all over the place.

KIRK: We’ve got a country to save, Todd, and you believe that and you do a great job. And you know I believe that we’re in the midst of a culture war right now. And one of the most significant culture wars in our country’s history and the stakes have never been higher. And you know God bless our president for putting together a track record of what it looks like when you defend our country and you defend sovereignty and you put forth these ideas and I believe it’s incumbent on everyone and you do such a great job of this, but everyone listening to this show to do everything you possibly can in your little sphere of influence, whatever that might be, to get this president re-elected. And that’s right we’re already talking about reelection. It seems like it was just yesterday it was that surprise victory, but we’re already back in that mode.

TODD: And Charlie and you know this. You are in the trenches. We’re fighting not just for a second term but we’re fighting for what happens after that second term and socialism is on the rise. Our public schools have been turned into indoctrination centers and that’s why I think the work of Turning Point USA is so vitally important. You guys are out there fighting this fight.

KIRK: Well thank you, and look, you’re exactly right. We have to ask ourselves the question where do all these ideas come from? Where did Alexandria Ocasio Cortez get radicalized? Where did Hillary Clinton go from a Republican to a liberal? The college campuses. College campuses are the power source of the radical socialist movement in our country. There’s no way that you could become a radical socialist by just existing out in the real world. These ideas must be taught. They must be indoctrinated towards young people and then that’s the fight that we’re focusing on and we’ve seen amazing progress. But I’ll be honest, Todd. Despite our historic progress there’s still so much left to be done. There’s still so much there’s still so many fights that we have to win. And it feels as if the Left realizes that in order to beat Donald Trump, they have to dominate on college campuses. The road to the White House goes straight through college campus, but the left is going to have to through us first.

TODD: It sure does. And I think you’ve got a great point there. I mean if you really want to look at the poster children of what the public education system has done to America, it’s Alexandria Ocasio Cortez, Rashida Tlaib and Ilhan Omar. That’s it in a nutshell.

TODD: Let’s talk though about this incredible new initiative and I think this is so important for our audience to know about. You have launched a new effort called Students for Trump and you’re looking for a million students to get involved in engaged in the campaign.

KIRK: That’s correct. Through our sister organization Turning Point Action which is our 501(c)4 organization we are now launching up the most ambitious and aggressive conservative Republican political outreach effort going into a reelection or general election. This is new territory, Todd. Usually Republicans serve it it’s just care about getting 50-plus voters in the suburbs to go vote for them. Never before has a multi-million-dollar effort been assembled and put together let alone this far away from an election with an announcement like this with a direct goal to mobilize young people and mobilize students to support a Republican conservative president. And we’re just excited to be doing this. This is a coalition and as we know coalitions wins elections. You’ve done a great job in the faith coalition building that. and the evangelical base behind this president has just been terrific. But if we’re were honest. the Democrats know that part of their formula is going to try to rebuild the Obama coalition, and the Obama coalition was a three-variable formula: Number one, it was young people and students. That’s where we come in. Number two, minorities. Number three is single women/suburban women, and as you can see, they’re really catering a lot of their messaging to those three groups. Student Loan Forgiveness. Slavery reparations. Total and blanket gun control. Pushing forth a gender wage pay gap. These are specific policy narratives that they are using that’s almost quasi bribery towards these groups, and for us we understand that students are being sold this lie of socialism every single day. And so, I would make the argument out of those three groups the group that is most for grabs is young people and students, because a lot of these a lot of the next generation is being told that Donald Trump is the worst president in American history. It’s going to be up to us to make them make the argument and make the pitch that it’s almost the exact opposite. He’s one of the greatest presidents in American history.

TODD: Charlie, are you guys going to be focusing on any particular states?

KIRK: Yes. We’re highly focusing on Florida, North Carolina, Iowa, Ohio, and Arizona, and I’ll tell you why. Obviously, their battleground states, but let’s just talk about North Carolina in particular. There are 114 colleges and universities in North Carolina. That’s right. 114. Think about that. That would be a kind of a fun cocktail trivia question ‘How many colleges are there in North Carolina.’ People would probably say 20 or 30, but you have the research triangle, you have a lot of small liberal arts schools. and you have very big schools like North Carolina State University, Wake Forest, you name it. And young people determine these elections and the lack of any sort of infrastructure and that’s really what we’re doing. I mean we’re 490 days or so away from the election, and we’re already talking about building infrastructure which is what’s so important. We’re talking student groups, identifying student leaders, grassroots activism. Success for us looks like Donald Trump winning triumphantly re-election in defiance to these radical Democrats who want to take our country in a dangerous direction.

TODD: I hate to say this but you’ve got your work cut out for you.

TODD: At Fox News.com, they reference this Gallup poll from March. Only 28 percent of voters between the ages of 18 to 29 approve of the president’s job performance. I’m not surprised Charlie, because if kids are watching television or listening to podcasts, it’s a Trump-bashing festival. That’s all it is.

KIRK: Right. It’s the Trump-hating Olympics. But you know what’s so great about having 28 percent approval rating? There’s nowhere to go but up, so what a great opportunity!

KIRK: You know the best part about being surrounded is you can shoot in any direction. So, these we’re really embracing this as an opportunity and here’s the other good thing. There is success to talk about. Veterans Administration accountability reform. We have Right to Try.  You have Gorsuch. You have Kavanaugh. You have tax cuts, deregulation, a booming economy, religious freedom finally being restored, international diplomacy being done and peace being brokered. So, there’s so there’s so much success to talk about. We’re going to be up against some very formidable forces that believe they’re entitled to the youth vote. Make no mistake. The Democrats believe they’re entitled to the youth vote. But what we’ve learned is all sometimes all you have to do is show up and compete and ask for that vote and drive up enthusiasm amongst our base. There’s a lot of young Christians out there Todd that are being told that it’s the Christian thing to do to go vote Democrat. In fact, that’s one of the main messages that he booted yet that somehow the party of infanticide and the party of Marxism that’s the party for Christians? I don’t think so. There’s so much potential for us out there were we are committed optimists and we believe that our message is going to be one that’s going to win going into 2020.

TODD: Charlie, where do folks go to get more information about Students for Trump?

KIRK: Well they know that TrumpStudents.org and they can go to my Twitter account. There’s a lot of stuff posted there and they’re going to be seeing a lot more information being posted there, or they can to TPAction.com, which is our sister organization. Turning Point USA which is TPUSA.com. Those are parallel visions, similar visions for different organizations, and this one solely committed to getting the president reelected.

TODD: All right. Well, Charlie, anything we can do on this program you just let us know. You have my producer’s info and we’ll do our part to help us spread the word about Students for Trump.

KIRK: God bless you, Todd. Have a great day.

TODD: All right. Thanks Charlie. The great Charlie Kirk, ladies and gentlemen. I think he’s probably going to be president one of these days. I have no doubt about that.