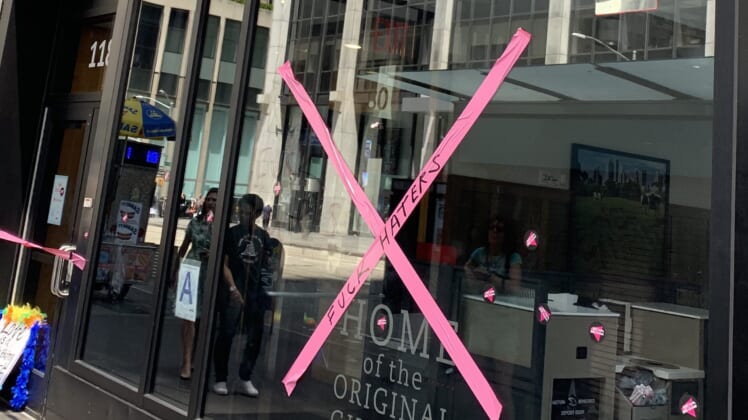 Vandals used a black marker to write, “F*** haters” on the windows of the Chick-fil-A located on the Avenue of the Americas. They also put pink tape in the shape of crosses on the window.

The Daily Caller was the first to report the incident and one of their reporters took photos. Click here to read their report.

For whatever reason nothing triggers a militant LGBT activist like a tender, juicy chicken breast tucked between hot, buttered buns. It’s one of life’s unanswered mysteries, I suppose.

I just had to get permission from my gay friend to get Chick-fil-A today on the 50th anniversary of Stonewall. Her response was “the straights win again” and now I’m donating the same amount to the Trevor Project ?

Just a reminder during this month of Gay Pride, celebrations of World Pride and the 50th Anniversary of the Stonewall Riots, @ChickfilA is still an anti gay company. Don’t eat Chick-fil-a!#worldpride #GayPride #nyc #gay #Stonewall50 #antigaycompanies