CNN’s Acosta Should Be Expelled From the WH Press Corps 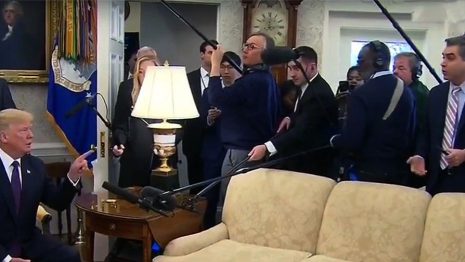 CNN, the most profane name in news, sank to a new low after an ugly Oval Office encounter involving President Trump and the networks’ senior White House correspondent.

Jim (Little Jimmy) Acosta badgered the president with a series of racially-charged questions during a photo-op with the president of Kazakhstan.

“I want them to come in from everywhere… everywhere. Thank you very much everybody,” Trump responded as Acosta continued hollering.

“Just Caucasian or white countries, sir? Or do you want people to come in from other parts of the world… people of color,” Acosta shouted.

Trump then pointed directly at Acosta and simply said, “Out!”

CNN is known for hiring journalists and broadcasters lacking in social graces. In recent days, the network has allowed reporters to use the word “s***hole” uncensored on-air.

Little Jimmy is not exactly a fair and impartial White House correspondent. He recently told Anderson “Giggles” Cooper that “deep down this president may just be a racist.”

Honestly, I’m surprised President Trump did not grab Little Jimmy by the ear and personally toss him out of the Oval Office.

Little Jimmy brought great shame upon himself and his network. And he embarrassed our president and the nation. He owes President Trump and the president of Kazakhstan an apology for his disrespectful behavior.

Beyond that – the White House Correspondents Association should sanction Little Jimmy by either revoking his press credentials or at the very least issue a public censure.

There’s a fine line between asking hard-hitting questions and being a loud-mouthed jerk. Little Jimmy crossed the line.