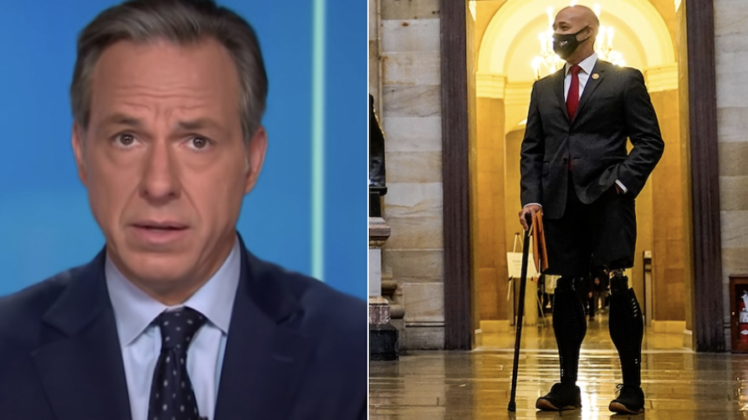 I’ve always believed that Jake Tapper was one of the most devious and immoral propagandists at CNN. And here’s even more proof.

The left-wing news anchor is facing national outrage after he questioned the patriotism of Rep. Brian Mast (R-FL).

Mast is an Army veteran who lost both of his legs in Afghanistan when he stepped on an improvised explosive device in 2010.

Mast drew the wrath of Tapper because he opposed the Democrat Party and Liz Cheney’s impeachment of President Trump.

“Congressman Brian Mast, a Republican from Florida — who lost his legs, by the way, fighting for democracy abroad, although I don’t know … about his commitment to it here in the United States,” Tapper told his colleagues during a panel discussion.

It’s an incredibly vile thing to say even by CNN’s low standards.

“Representative Mast, along with myself and many others in Congress and across the country, served in the military so Americans can have freedom of speech, regardless of how repulsive or disgusting it may be,” reacted Rep. Rick Crawford, R-Ark., who is also a veteran.

“I lost two legs for @jaketapper‘s right to say whatever the hell he wants, but that free speech also protects the Republicans he is so eager to condemn for asking Constitutional questions about the election,”

As for Jake Tapper, if you can’t say something nice about a combat veteran, it’s best if you just keep your mouth shut.

Rep. Mast is a veteran and lost both of his legs while serving this country. pic.twitter.com/JlfKCnz3VD

I lost two legs for @jaketapper's right to say whatever the hell he wants, but that free speech also protects the Republicans he is so eager to condemn for asking Constitutional questions about the election. https://t.co/ViNrwz9cbU