Conservative Students Sue College for Being Treated Like ‘Second-Class Citizens’ 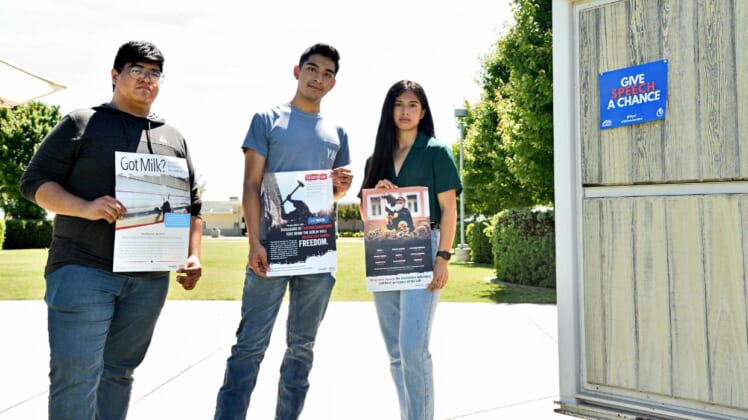 College conservatives in California are suing their school after being treated as “second-class citizens,” Kara Zupkus, spokeswoman for Young America’s Foundation (YAF), said on the Todd Starnes Show.

YAF students at Clovis Community College, represented by the Foundation for Individual Rights and Education (FIRE), filed the lawsuit Thursday.

“Clovis tried to put up barriers against our ideas because administrators didn’t like them,” said YAF-Clovis founder Alejandro Flores. “But that’s the opposite of what a college should do. Our college should encourage us to discuss and sharpen our ideas, not shut down the conversation.”

LISTEN TO THE INTERVIEW WITH KARA ZUPKUS BELOW:

Below is a rushed transcript from the Todd Starnes Show:

STARNES: [00:44:13] We’ve got an important story to share with you out of California. I believe this is Clovis Community College, where they’re cracking down on conservative college kids. And, you know, on this program, nothing gets us going like these attacks on conservative college kids on their campuses. We have with us Kara Zupkus from the Young Americas Foundation. Kara, good to have you with us. What’s going on at Clovis?

ZUPKUS: Yes, thanks so much for having me on to talk about this super important story. So today, our students at Clovis Community College, the YAF chapter there, announced that they are suing their school, specifically the administrators and the president of the college for basically discriminating against them, for having conservative ideas. Now, what this kind of bring back to you is the fact that the school removed posters, that the conservative students hung around campus promoting anti-communism ideas. So we’re memorializing all the lives lost in communist countries. And the school took them down because someone complained, saying they were offensive. Then we flash forward to another situation where the chapter wanted to hang up pro-life fliers around the time of the Dobbs decision being discussed and brought before the Supreme Court. And the school refused to approve those posters to be hung and instead told them that they could hang the fliers on this so-called free speech kiosk, which is like in the middle of nowhere on campus, not very well traveled and really rundown area. So we’re seeing here that conservative students are being treated like second-class citizens. And these students said enough is enough. We’re going to sue our administrators because we will not be tolerating this behavior.

STARNES: Good for you guys. And I think that’s exactly what needs to happen. Take ’em to court, let the alumni, let the donors know what’s going on and maybe head to where it hurts the most, which is the pocketbook. But, Kara, I just I find it very interesting that anybody would be offended by my posters that were pointing out the dangers of communism in this country.

ZUPKUS: Exactly. I mean, the irony here is that really the school is kind of becoming an authoritarian state by not allowing them to hang up these fliers. And what was revealed actually in a public records request done by Young America’s Foundation showed that administrators were kind of scheming behind closed doors. One of them wrote in an email that he would, quote, gladly take the fliers down after people complained about them. Other people, administrators, discussed potentially changing the policy, rewriting it to not allow these posters to be hung up. So, what we are seeing is absolutely them discriminating against and scheming behind closed doors to get these students to not be able to just express their free speech rights, which if you can’t do that at a college campus, that’s just bad, because that’s absolutely the cornerstone of higher education, is the open exchange of ideas.

Todd’s new book is now a best-seller. Our Daily Biscuit: Devotions With a Drawl. It’s a great summertime read. Get a copy at your favorite bookstore and ToddStarnes.com.

STARNES: And Kara, you might remember a couple of years ago, I believe it was always Milo Yiannopoulos. He was doing the big protest out there at Berkeley, which is the the cradle of the free speech movement on college university campuses. And those kids almost burned down the college the university over there. It’s just insane. What you guys are having to go through, what other conservatives kids are having to go through on these university campuses.

ZUPKUS: Exactly. And luckily, Yaffe does have a track record of holding these schools accountable in the court of law, like we sued Berkeley, like with the University of Florida. We are competent in this case, and we’re excited to see it come to fruition. It seems like it’s been in process for a long time. These students have been putting up with it for a very many months now, and we’re excited to finally see it come to fruition and excited to see what the school’s response will be to this lawsuit being served.

STARNES: Well, good for you guys. And Kara, I’m curious. School just getting started. You guys are launching high school chapters, middle school chapters. What sort of response are you guys getting from young people based on what’s been happening in the country right now? Any kind of a groundswell of new members?

ZUPKUS: Yes, we are absolutely seeing an increasing in numbers, especially since all the COVID lockdowns, a lot of people have kind of woken up to this, the realization that, hey, the government actually is a horrible idea. They kept us locked down and out of our classroom for the last two or three years. So, we’re seeing an increase in numbers. We’re seeing an increase in enthusiasm to be bringing these conservative ideas to campus this fall. And we’re so excited to work with students all across the country and all 50 states to really be making sure that conservatives can be heard on these campuses.

STARNES: Good for you. All right, Kara, keep us updated on on this story. And we appreciate the great work that all you guys are doing over at YAF.

ZUPKUS: Awesome. Thank you so much.