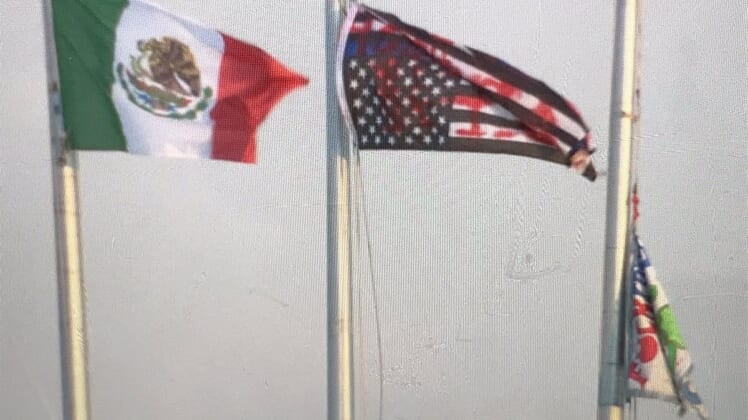 A mob of anti-American protesters took down the American flag and raised the Mexican flag outside a detention center for illegal alien invaders in Aurora, Colorado. Listen to more on the Todd Starnes Radio Show Podcast.

The Denver Channel reports about 2,000 protesters, including some illegal aliens, gathered outside the detention center.

Protestors on @ICEgov property just pulled down the American flag and replaced it with the Mexican flag. The group by the doors is growing. Though most protestors are still on the street. pic.twitter.com/X2waaFMEOW

Now flying outside @ICEgov detention center in Aurora – an upside down and dirty American flag, Mexican flag and one with foul language. Protestors still here. pic.twitter.com/eXdnbdBXVi

It should be clear by now that our country has been invaded and overrun by millions of illegal aliens.

And their true intentions have been made known by tearing down the American flag — this is an invasion.

Police Chief Nick Metz ordered officers not to break up the protest, “noting that the event seemed pretty peaceful,” the Sentinel reported.

Taking down the American flag and raising another nation’s flag on American soil is not a peaceful act; it’s an act of war.

Chief Metz also told the newspaper his department does not have the authority to enforce federal immigration laws or detain illegal aliens.

In other words, Aurora is a lawless city that provide safe harbor to the illegal alien invaders.

I dare @AOC or any Presidential candidate to support this anti-American act.

In fact they must all condemn it.

We need to know just how patriotic they are.

Which country’s flag do they support? https://t.co/jGCzH9GBid