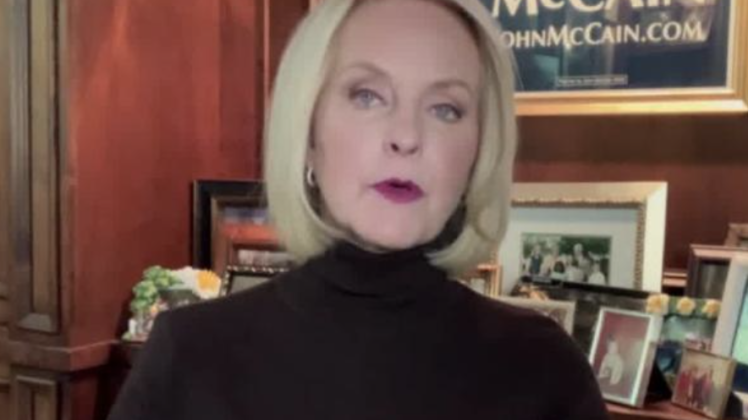 Arizona Republicans voted on Saturday to censure three notable party members in the state in what was seen as a largely symbolic move but showcased their desire to align themselves with President Trump.

The three Republicans censured were Cindy McCain, the widow of former Sen. John McCain; Gov. Doug Ducey and former Sen. Jeff Flake. The three came out strongly opposed to Trump prior to the 2020 election. NPR pointed out that the state turned blue and handed Joe Biden its 11 electoral votes.

The report, citing state GOP members, said that McCain and Flake were censured for their criticism of Trump and support of “globalist interests.”

McCain announced her support for Biden during an appearance on NBC’s “Today” show in September. She told the network that she was “deeply concerned” about the country under Trump’s leadership. She said that she thought Biden would make a “wonderful president.”

Trump immediately fired back at her endorsement and said, “Joe Biden was John McCain’s lapdog. so many BAD decisions on Endless Wars & the V.A., which I brought from a horror show to HIGH APPROVAL. Never a fan of John. Cindy can have Sleepy Joe!”

Flake took to the op-ed page in The New York Times to plea with fellow Republicans to turn their back on the president on the day the Electoral College was certified by Congress.

“I once had a career in public life — six terms in the House of Representatives and another six years in the Senate — and then the rise of a dangerous demagogue, and my party’s embrace of him, ended that career,” he wrote.

Ducey faced criticism for COVID-19 lockdowns in the state, according to the report. The Associated Press reported that Flake took to Twitter to post a photo of himself with Ducey and McCain that he captioned, “Good company.”

The NPR report also pointed out that Kelli Ward, an ardent Trump supporter, was re-elected as party chair. The Associated Press reported that the censure showed “the party’s foot soldiers are focused on enforcing loyalty to Trump, even in the wake of an election that saw Arizona inch away from its staunchly Republican roots.”

“The people who are complaining are the people who actually put us in this spot where we are in Arizona, people who have been mamby pamby, lie down and allow the Democrats to walk all over them,” she said.