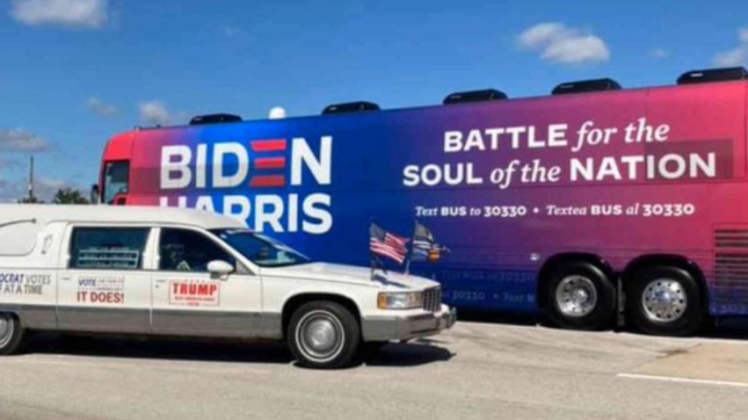 Lt. Col. Allen West told the “Todd Starnes Show” on Monday that it was interesting to see the media’s reaction to the Biden campaign bus “incident” while major cities have been forced to board up storefronts to prepare for the “real violence.”

“Of course the left is trying to redefine that as some act of terrorism or what have you,” West said. West said that when Biden said he was going to transition the country away from oil and gas, that was when many Texans realized that he is not their candidate.

“When you look at his position on gun control, we don’t want that in Texas,” he said. “We want our First Amendment rights, our Second Amendment rights” and Texans want a strong economy where the U.S. is energy independent and export its own energy resources.

“We don’t appreciate folks coming into Texas and trying to undermine Texas values,” he said. “As the saying goes, ‘Don’t mess with Texas.”

Todd Starnes, the host of the program, said he watched the incident involving a Biden bus and Trump supporters a few days ago, and said it took him “all of 30 seconds” to determine that it was the Biden car that was part of the Biden campaign that was the aggressor, not the Trump supporters.

The incident allegedly prompted the FBI to announce that it was looking into the incident, which prompted a swift backlash from President Trump and other Republicans, like Rep. Matt Gaetz, R-Fla., who criticized the FBI for, once again, targeting Trump supporters.

Starnes pointed to a statement released Sunday from the San Marcus Police Department, that said the vehicle that might be at fault was the white SUV and the victim “appears to be the black truck.”

West told Starnes that it was remarkable that this particular incident would attract the attention from the FBI considering that the “real violence” is occurring in cities across the U.S. that have to board up retail stores due to the threat of Election Day violence.

“Again, they know that they’re going to lose this election and they are going to resort to what socialists and Marxists have always resorted to…after threats, intimidation and coercion does not work, they go to violence.”

West said that he believes the “Silent Majority” of Americans are tired of giving in to the ANTIFA movement and anarchy on the streets, and they are going to take a stand on Election Day.

Police say it appears a Biden-Harris vehicle may be responsible for an incident in Texas with the Biden Bus. @AllenWest with the full story coming up on the #ToddStarnesShow. LISTEN LIVE https://t.co/Ppl7e9vVGd