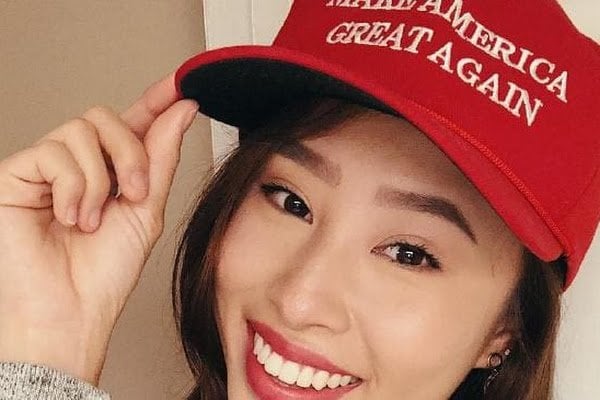 Kathy Zhu tells me she was removed from the Miss World America pageant and stripped of her title as Miss Michigan because of her conservative political views.

“I was in shock, devastated and cried,” the University of Michigan student said in an exclusive interview with The Todd Starnes Radio Show. “I almost expected this would happen due to my political opinions, but there was still a glimmer of hope in me that I could continue in this pageant.”

Ms. Zhu, a supporter of President Trump, was dismissed from the pageant just one day after she received the crown.

She published messages from pageant officials that claimed she was removed because of content on her social media pages that was “offensive, insensitive and inappropriate.” I asked Ms. Zhu about the context of those comments.

She Refused to Wear Hijab

One of the tweets referenced an incident in 2018 when she declined to wear a hijab on World Hijab Day.

“So you’re telling me that it’s now just a fashion accessory and not a religious thing? Or are you just trying to get women used to being oppressed under Islam,” she tweeted.

Ms. Zhu tells me that she was shocked by the “try on a hijab booth.”

“Women in some Muslim countries are being stoned to death for refusing to wear their hijabs,” she said. “And while that’s happening, how can Muslims in America jokingly tell others to try this religious garment on? They almost used it as a fashion accessory.”

“Did you know the majority of black deaths are caused by other blacks? Fix problems within your own community before blaming others,” she tweeted.

Ms. Zhu said her tweet was in response to another girl’s tweets about police violence against blacks.

“She used disgusting phrases like, ‘all cops are pigs’. I disliked how she put a blanket statement over all cops. Of course, I realize certain police officers are guilty of violence, but to say every cop is bad just isn’t okay,” she told me. “So i provided her with a statistical fact that there are more black on black violence than there are of police violence against black people.”

Zhu Stands By Her Words

Ms. Zhu stands by what she wrote.

“I’ve dealt with the ‘your facts are racist’ comments so many times in life, and at this point, if you cannot open your mind and grow knowledge for yourself, I cannot force statistics and facts onto you,” she said.

I suspect this has more to do with the former Miss Michigan being a staunch supporter of the police and President Trump.

“I’ve been a Trump supporter ever since my senior year of high school. He represents this sense of hope for the America people that are tired of democratic candidates promising things yet not acting on the promises. He is also so proud to be an American and truly wants to make America a better place for all,” she said.