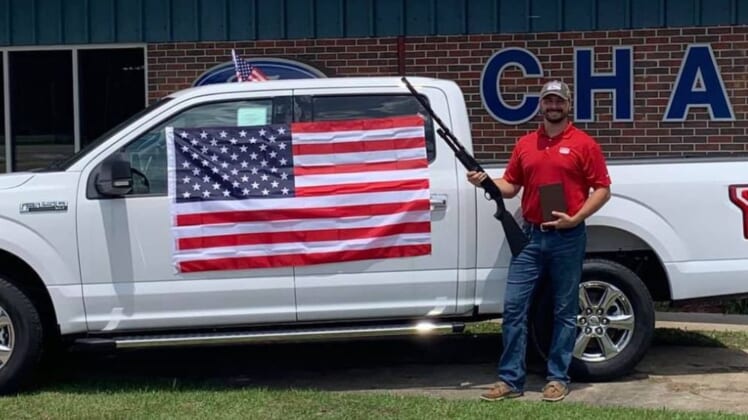 The Ford Motor Company ordered an Alabama dealership to stop running a promotional campaign that offered customers an American flag, a 12-gauge shotgun and a King James version of the Holy Bible.

Colin Ward, the general manager of the small-town dealership, was a guest on The Todd Starnes Radio Show last week.

Unfortunately, the folks who run the Ford Motor Company were not as keen on supporting the local community.

The following day the car dealership was told to take down its patriotic special.

Spokesman Mark Truby said the dealership had promised to “stop talking about it as God, guns and glory,” the newspaper reported.

The dealership deleted the video promoting the special and posted a Facebook message explaining that they were complying with Ford’s request.

“We were running a promotion celebrating this country’s independence. Ford Motor Company has asked us to stop running the advertisement. They manufacture the products we are franchised to sell, so we are complying with their request. We appreciate everyone’s support. All the phone calls and messages were so greatly appreciated. We will fulfill all commitments we made to our customers.,” the message read.

Folks, as I write in my upcoming book, “Culture Jihad,” there is a concerted effort by the left to destroy America and her traditions. They are literally turning our traditions into rubble. Click here to pre-order a copy of my book!