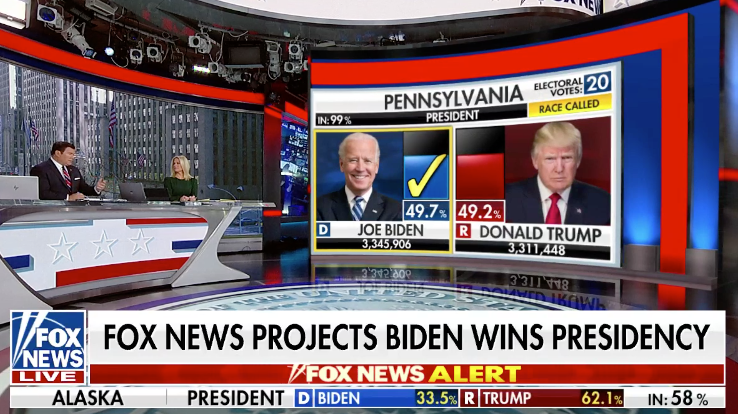 Fox News Channel is projecting that former Vice President Joe Biden is the next president of the United States.

The Fox News Decision Desk, you might recall, is run by a registered Democrat who has given considerable money to Democrat candidates — including Hillary Clinton and Barack Obama.

What’s interesting about the call is that votes are still being counted and there are a number of lawsuits alleging voter fraud.

“I am honored and humbled by the trust the American people have placed in me and in Vice President-elect Harris,” Biden said in a statement. “In the face of unprecedented obstacles, a record number of Americans voted. Proving once again, that democracy beats deep in the heart of America.”

But in a statement Saturday, Trump did not concede.

“The simple fact is this election is far from over. Joe Biden has not been certified as the winner of any states, let alone any of the highly contested states headed for mandatory recounts, or states where our campaign has valid and legitimate legal challenges that could determine the ultimate victor,” the president said.

According to the United States Constitution, Fox News Channel does not get to decide the presidency. Neither does your local cable access station.