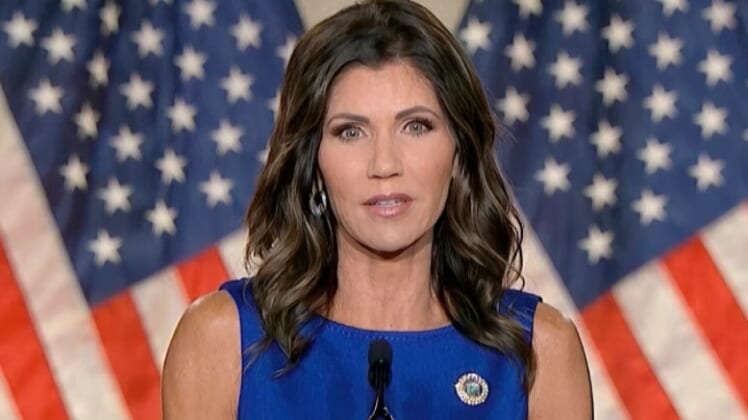 South Dakota Gov. Kristi Noem is facing criticism from conservatives and religious liberty groups have she declined to sign a law that would have protected student athletes who are biological females.

Alliance Defending Freedom, one of the nation’s most prominent religious liberty law firms, and Family Research Council were among some of the most outspoken critics of the Republican governor.

“Unfortunately, not everyone was surprised by the governor’s cowardice. Groups like FRC and Republicans on the ground were already well acquainted with Noem’s bad track record on transgenderism,” FRC wrote in a statement. “Most people never knew it, but Kristi Noem was responsible for killing a much better bill that would have protected kids in February of last year.”

Gov. Noem addressed her critics by accusing them of bullying. Following is a partial transcript. You can listen to the entire interview below.

STARNES: Family Research Council posted a pretty scathing statement and they suggested that you bent a knee to Amazon, the Chamber of Commerce and the NCAA. How do you respond to that allegation?

NOEM: That’s completely untrue and it’s unfair. And if they would read the style and form revisions if they would read the concerns and recognize the drafting in this bill and how it opened up families in school districts to litigation with some of the verbiage and the lack of definition of performance enhancing drugs. If they would take an honest look at it. I think they would recognize exactly why I did what I did and listen, this is what governors do. People people have told me many times well just sign it and then go back and fix the problems with it. Well, that’s not what responsible leaders do. And I’ve proven to people.

NOEM: This is what’s ridiculous, Todd about the whole argument to me. I went through fire standing on my beliefs and my authorities as a governor, and the last year while the left was raining on my head for the last year and nobody was supporting me, and I was the only governor and the only state to make the decisions that I made. Do they honestly think that on this issue that I would cave and cave like that? I think it’s ridiculous. And listen, I’ve been bullied by the left for years. Now, there’s bullies on the right, too. And I guess that’s the people that we’ve seen coming after me in recent days.

STARNES: Well, in fairness, though, I mean, if you think about this, I mean, the Republican Party has a history of lawmakers doing this. And so, you know..

NOEM: I don’t. I mean, I don’t. I would love to see anybody point to my history and say that I don’t follow through on what I say I’m going to do. That is just not in my history anywhere and Family Research Council and these folks that have been attacking me, they know better. So I think that I have proven myself to them. They should know that. They should put some research and study into what’s actually going on and then have a conversation with me before they attacked me in the public. For me, it’s bullying and it’s unfair.