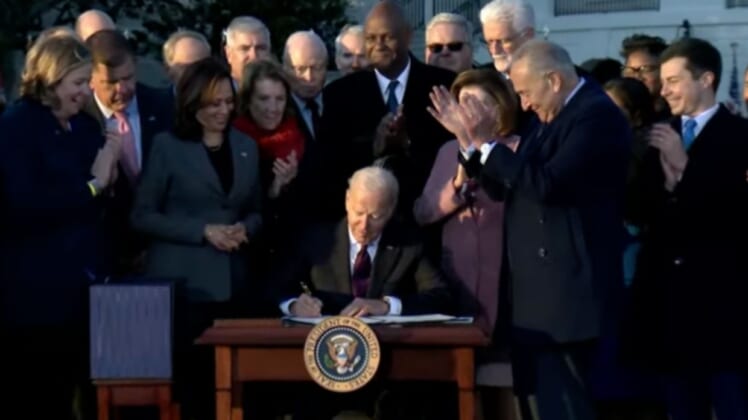 “There’s so much waste in these bills, you think about the $1.2 trillion in the so-called infrastructure bill that had very little infrastructure…and that is just the gateway drug to this massive bill that they’re going to pass in the House this week,” Hagerty said. “This is all part and parcel of this massively inflationary, you know, push towards socialism that the Biden administration is trying to dump upon America.”

LISTEN TO THE FULL INTERVIEW WITH SEN. BILL HAGERTY BELOW:

Below is a rushed transcript from Sen. Bill Hagerty’s interview on the Todd Starnes Radio Show:

Starnes: [01:00:15] By the way, I just want to play some audio. This just dropped from this. You know, Alejandro Mayorkas, the Homeland Security secretary up on Capitol Hill, testifying and he was asked about those Afghan refugees. Card number 10 real quick, guys. [01:00:29][13.9]

Speaker 1: [01:00:29] You just said that they are not being interviewed unless they’re already in our system as a known terrorist. That would have captured none of the nine 11 hijackers. If I may, senator, that is that is not, and I apologize if I was not clear. You are correct that we are not conducting in-person, full refugee interviews of 100 percent of the individuals. What percentage are you conducting? I don’t have that information. What number have been interviewed about what we are doing? Wait, wait, wait. What number? What number of of the of the more than 60000 brought to the country? What number have received an in-person interview before they came to the country? Because you said 100 percent are screened? So what percentage have been given an actual interview by a trained official before they come to the country? When you’re speaking of a full refugee like interview? I don’t have that data. I will. Why not? Are you tracking it? No, I don’t have that data with me. What I hear you, I understand what that means. But why don’t you? Are you not traffic tracking it? No, we are. We have got it in the Department of Homeland Security. You’re asking me what data I have at my fingerprints. Well, why don’t you have it? You run the Department of Homeland Security. Why do you not know who has been interviewed or not before they’re brought to this country? [01:01:43][73.7]

Starnes: [01:01:43] So let’s just cut to the chase here. Senator, there’s a very real possibility that Islamic terrorists, Islamic radicals have been dumped in cities and towns all over America, and we don’t know anything about it. [01:01:57][13.0]

Hagerty: [01:01:58] Well, that possibility has been ongoing since before the collapse of Afghanistan. I mean, you know, it’s happened in our own state, Todd. Where they bring these people that are rushing the southern border. I think over 100 different nationalities have been identified coming across that border. They have found people that are on the terrorist watch list, and I’m certain that these are folks who have actually been caught not to getaways. So it’s happening multiple ports. I’d be shocked if there weren’t very problematic people mixed into this group here because the State Department has been overwhelmed in this process. Homeland Security When I heard that Secretary Mayorkas, the head of Homeland Security, is going to be put in charge of this. I got very concerned. Same person responsible for a border situation down there, along with along with Kamala Harris, our vice president. They’ve done such a pathetic job there. Now we’re going to put him in charge of screening the Afghan refugees that are coming here. It’s a disaster. [01:02:50][51.9]

Starnes: [01:02:51] Meanwhile, here here at home, and I can tell you that prices are just skyrocketing. The average price of gasoline, I think nationwide up 60 percent, the latest survey I saw. And this is going to be the most expensive Thanksgiving dinner, I think, in the history of Thanksgiving dinners because of the rising inflation rates. [01:03:14][22.5]

Hagerty: [01:03:15] Yeah, Biden’s inflation is crushing Americans. And you look no further than the gas pump and think about what he did the first week that he got into office. He crushed the Keystone XL pipeline. He halted drilling on federal lands is basically, you know, basically decided that it should be an All-Out War on the fossil fuel industry here in America. Under President Trump, we have achieved energy independence. Now, under Biden, they’ve got a war on fossil fuels. We are in a situation where we’re no longer energy independent. He’s got to resort to begging OPEC [01:03:48][32.1]

Starnes: [01:03:52] on the Patriot mobile newsmaker line. Our good friend, Senator Bill Hagerty. Sorry, Senator, I think the phone might have dropped for a second or two. I want to get your take on a column you wrote in the Tennessean newspaper in the Nashville area. You’re pretty fired up over the payoff that Biden made to the labor unions on this issue of electric cars. [01:04:13][20.9]

Hagerty: [01:04:15] It’s unbelievable, Todd. I mean, the federal government is already subsidizing the purchase of electric cars so that the, you know, the folks that are making over $400000 can buy their Teslas with a subsidy. But what Biden has done has gone even further. He’s added an extra $4500 bounty and extra payoff, an extra subsidy for people that buy cars, electric cars made by union plants. Now, only two of the 52 vehicles currently available in United States that are electronic come out of a union facility. What he’s trying to do is put a lot more work on unionization and throw another lifeline to his union buddies, who were one of the biggest funders. The biggest donors, the Democrat Party just a rank payout. [01:04:59][44.0]

Starnes: [01:05:00] That’s exactly what it is. It’s just unbelievable. By the way, I don’t know if you saw the Tennessee and I know you guys, you send your column in to the to the Tennessee and then they turn around and they add their own. Editor’s note Basically, fact checking, you said these people are incorrigible. [01:05:17][16.9]

Hagerty: [01:05:19] Well, they certainly did, in fact, check the young Yale student who wrote, you know, criticize me on the posture I took fighting against the infrastructure bill without checking any of the facts. But of course, a conservative voice is something that always gets extra scrutiny among many in the news media. [01:05:35][16.0]

Starnes: [01:05:36] And by the way, all that infrastructure we’ve been going through, that thing. A thing is it’s a monstrosity of a package, basically nothing to do with infrastructure, but every state gets a million dollars to encourage kids to walk to school instead of riding a school bus. A million bucks. [01:05:52][16.4]

Hagerty: [01:05:54] You know, there’s so much waste, and in these bills, you think about the $1.2 trillion in the so-called infrastructure bill that had very little infrastructure, as you say, tied in it. And that is just the gateway drug to this massive bill that they’re going to pass in the House this week. I’m worried about. And if you look at what they’re talking about, that’s in the bill to come. They’re talking about $300 checks every month for illegal immigrants. Illegal immigrants are getting to free child care and free college under their bill. You talked about the crisis at the southern border today when we put this type of bounty in place. We’re going to have a rush across the border like you like. We’ve never seen it’s already at that level. Now it’s going to be just an incredible crushing blow to any type of security in the southern part of the United States, and they’re going to flow into the rest of America. Again, this is all part and parcel of this massively inflationary, you know, push towards socialism that the Biden administration is trying to dump upon America. [01:06:47][53.0]

Hagerty: [01:06:58] It’s amazing, Todd, if you think about the amount of damage they’ve done in just the 10 or 10 and a half months they’ve been in office. It is absolutely incredible. You know, it’s it’s the energy crisis that you pointed to killing the Keystone XL pipeline, making gas prices, as you said, 60 percent higher since they’ve come into office, the complete collapse of our southern border, I think that’s the greatest national security crisis that we’re facing as a nation right now. If you think about the appeasement toward Iran that led to, you know, it’s emboldened them to support their proxies and hit Israel hard, which they’ve done. If you think about what’s happening with respect to Russia, what they’ve done in terms of their hackers hitting the Colonial Pipeline and then at the collapse of Afghanistan was an embarrassment beyond all proportion. We lost American lives in that process. We did. And China has been so emboldened, they’re now acting on Taiwan in ways I think they would have never dreamed of had President Trump still been in office. So the Biden administration in 10 and a half 11 months, not not even 11 months, has precipitated disaster after disaster crisis after crisis. And as you said, we’re not even a year into this. [01:07:58][60.1]