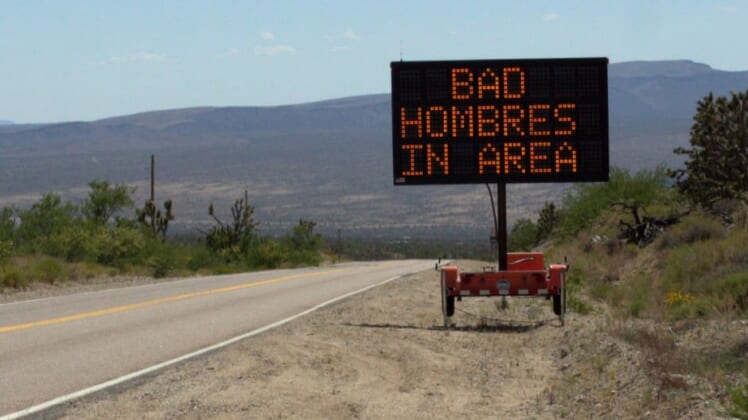 Democrats are railing on President Trump. His rhetoric is divisive, they say. His border policy is discriminatory, they claim. Still, President Trump has a strong base of support, even among the Hispanic community.

“I applaud Donald Trump, as a Hispanic brought over here legally many years ago,” said Alex, a caller from Las Vegas, on The Todd Starnes Show. “I think what he’s doing is exactly what a president should have been doing 50 years ago in this country.”

Alex went on to say that people in today’s Democrat Party are proving his parents right.

“My parents told me many, many years ago the United States was going to be infiltrated, not just from the outside, but from politicians in local governments that have infiltrated our country and do not believe in upholding the law.”

USA’s Immigration Laws Are Not Immoral

Alex, a former Democrat, admitted that today’s immigration laws are not perfect, but he said they’re not immoral either.

“They’re trying to compare it to slavery and concentration camps that’s ridiculous,” said Alex. “The Democratic Party is going to get a rude awakening, because here in Las Vegas, I’ve spoken to many Hispanics that used to hate Donald Trump, and quite a few of them are saying they’re going to vote for Donald Trump because he didn’t turn out to be the racist that people claimed.”

Alex later recalled a conversation he overheard at his predominantly Hispanic church. Congregants were discussing the “invasion from Central America.”

“Had I closed my eyes, I thought I was talking to an Anglo group of people, but no, these were Hispanics talking just like Donald Trump supporters,” he continued. “Here in Las Vegas, there’s a lot of people that are starting to realize that the invasion of the illegals here are starting to stagnate the pay for construction people.”

Wages are among the reasons why Bob in San Antonio defended President Trump on the nationally syndicated radio program.

“I was speaking to a young man who didn’t have a lot of skills, but he wanted to be paid more than $10 an hour, and said he was all for immigration,” Bob told the Todd Starnes Show. “I said to him, ‘Why would I raise you to $15, if I can hire a person from Central America for $5?’ and then I said, ‘illegal aliens hurt people like you the most.”

“Bob, you’ve just illustrated the main reason why the president is not getting a response from the Establishment Republicans, the Big Business Republicans,” added Starnes. “They want that cheap labor. They’re not looking out for the American working man.”

Bob, who was born in Mexico and came to the U.S. legally with his parents, said there’s a difference between loving America and being an American.

“There’s a lot of people that love America, and they’ll exploit it for all it’s worth, but the question is, ‘Do you want to be an American?’ Bob explained. “If you’re Nicaraguan, if you’re Mexican, if you’re legal here, you’re not that anymore. You’re an American.”

“Honestly, we need to hear from Hispanic Americans,” said Todd Starnes. “They are being impacted by the illegal alien invasion of this country probably more so than anyone else, and we need to hear those voices.”