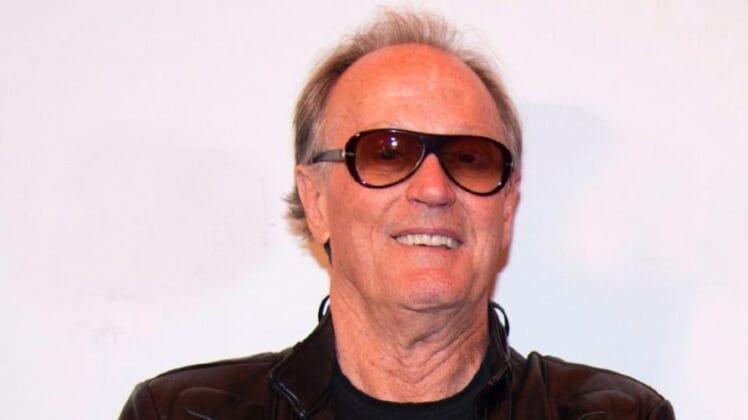 The Secret Service has been notified of threats made by Hollywood actor Peter Fonda against President Trump’s 12-year-old son.

Fonda called on his Twitter followers to “rip Barron Trump from his mother’s arms and put him in a cage with pedophiles.”

Fonda, who is the younger brother of “Hanoi Jane” Fonda, called President Trump a “f***ing monster” and an “a**h***.”

Clearly, these are tweets from an emotionally disturbed and dangerous man.

“Kristjen Nielsen is a lying gash that should be put in a cage and poked at by passerby,” he wrote. “The gash should be pilloried in Lafayette Square naked and whipped by passersby while being filmed for posterity.”

He called Sanders a “lying gash, too.”

“And ‘gash’ is much worse than c***. Maybe we should take her children away and deport her to Arkansas, and giving her children to Stephen Goebbels Miller for safe keeping.”

But Fonda’s horrifying threats against the president’s son were beyond the pale.

“WE SHOULD RIP BARRON TRUMP FROM HIS MOTHER’S ARMS AND PUT HIM IN A CAGE WITH PEDOPHILES AND SEE IF MOTHER WILL WILL STAND UP AGAINST THE GIANT ASSHOLE SHE IS MARRIED TO. 90 MILLION PEOPLE IN THE STREETS ON THE SAME WEEKEND IN THE COUNTRY. FUCK,” he wrote.

“I tweeted something highly inappropriate and vulgar about the president and his family in response to the devastating images I was seeing on television. Like many Americans, I am very impassioned and distraught over the situation with children separated from their families at the border, but I went way too far,” he wrote in a statement provided to Fox News. “It was wrong and I should not have done it. I immediately regretted it and sincerely apologize to the family for what I said and any hurt my words have caused.”

A member of one of Hollywood’s most renowned families threatened violence against women and children. He threatened to toss the president’s son into a cage with pedophiles. But Hollywood has remained silent.

How sad that not a single celebrity could muster the moral courage to condemn a man who advocated for sexually assaulting the president’s 12-year-old son.

Fonda’s behavior endangered not just the First Family, but the families of countless border agents and federal officers.

Those kinds of threats must be taken seriously – especially threats uttered by Hollywood celebrities.

After all — it was a practicing thespian who assassinated Abraham Lincoln.