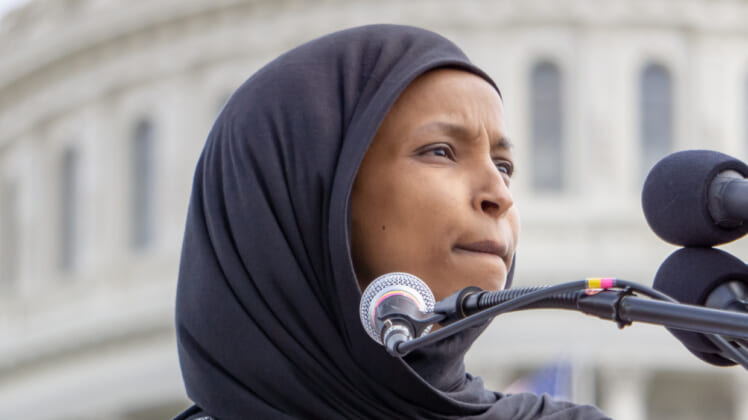 UPDATE: Omar put out a statement Thursday clarifying her comments, which you can view at the bottom of the story.

A group of Jewish House Democrats is calling out Rep. Ilhan Omar (D-MN) for sympathizing with terrorist groups Hamas and the Taliban.

The Squad member claimed on Monday America and Israel have committed “unthinkable atrocities,” putting them in the same category as the terrorist groups.

“Equating the United States and Israel to Hamas and the Taliban is as offensive as it is misguided,” the statement, led by Rep. Brad Schneider (D-IL), began.

“Ignoring the differences between democracies governed by the rule of law and contemptible organizations that engage in terrorism at best discredits one’s intended argument and at worst reflects deep-seated prejudice.

“The United States and Israel are imperfect and, like all democracies, at times deserving of critique, but false equivalencies give cover to terrorist groups,” the statement concluded.

“We urge Congresswoman Omar to clarify her words placing the US and Israel in the same category as Hamas and the Taliban.”

Omar responded in a tweet, calling it “shameful” and accused her Jewish colleagues of “unbearable” Islamaphobia and harassment.

Rep. Lee Zeldin (R-NY), who is running for governor in New York, said, “Ihan Omar must be removed from the House Foreign Affairs Committee. She should have never been appointed to this Committee in the first place.”

Rep. Nicole Malliotakis (R-NY) told Newsmax Wednesday it was “shocking” to hear Omar’s comments: “She should not be a member of the House of Representatives if she feels this way about the country she’s representing.”

Rep. Brian Mast (R-FL) added: “This is absolutely disgusting from a Member of Congress. I lost two legs and a finger defending the USA and fighting the radical Islamic terrorists that Ilhan Omar is now defending. She is completely unfit to serve our country.”

“We have terrorist sympathizers in Congress and it is being normalized by the MSM,” she said.

Rep. Ronny Jackson (R-TX) called Omar’s comments the “MOST un-American things I have EVER read…Ilhan Omar HATES America, and she’s actively sabotaging the nation that has given her EVERYTHING.”