Jeremy Dys: The War Over the Ten Commandments is Over 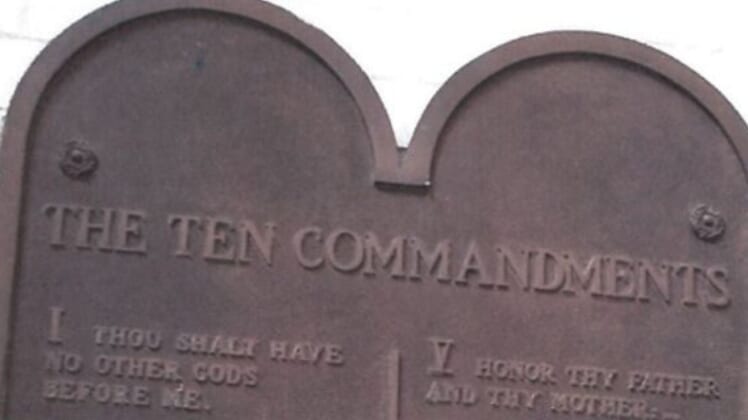 Supreme Court Justice Samuel Alito, writing for the majority of the U.S. Supreme Court in its recent decision in The American Legion v. American Humanist Association, warned, “A government that roams the land, tearing down monuments with religious symbolism and scrubbing away any reference to the divine will strike many as aggressively hostile to religion.”

Officials with the City of New Philadelphia, Ohio may be close to sending that very message.

Of course, city officials may not be entirely to blame. An activist organization, whose chief mission for years has been to scrub away any reference to the divine, aggressively driving religion from public view, and provoking local officials to do likewise, demanded that city officials tear down a much beloved, historic plaque featuring the Ten Commandments.

The plaque, given by the Welty Middle School Class of 1926, is just one year younger than the “peace cross” that the U.S. Supreme Court upheld as perfectly constitutional in The American Legion. It joins a long tradition of displaying the decalogue in public — including in the Supreme Court’s own courtroom. That it is a religious symbol on public property is no longer of any consequence.

City officials consulted their attorneys after receiving a demand to remove the historic plaque. The attorneys explained that the Supreme Court of the United States would have to overturn a past Supreme Court decision in order to leave alone the gift from the Welty Middle School Class of 1926. Ironically, on the same day the school district announced that the historic plaque had to be removed, the Supreme Court announced that such a plaque is now “presumptively constitutional.”

In The American Legion, the justices went beyond ending the specific war on veterans memorials. A majority of seven justices explained that “religiously expressive monuments, symbols, and practices” along with the “passage of time gives rise to a strong presumption of constitutionality.”

Not only that, but part of the legal analysis also included a warning against seek-and-destroy missions by those otherwise tempted to skirmish after the war’s end. As Justice Alito explained in The American Legion, “a campaign to obliterate items with religious associations may evidence hostility to religion even if those religious associations are no longer in the forefront.” In other words, campaigns, like that waged in New Philadelphia, will no longer be tolerated by the courts.

It appears that some officials may be reconsidering the agenda-driven complaint of the secularist group and even the less-than-up-to-date advice of their attorneys. That’s good. As the law firm that represented The American Legion before the U.S. Supreme Court, our advice is simple: Put it back up.

The justices in The American Legion, in addition to ending the war on “religiously expressive monuments, symbols, and practices,” placed the burden of proof on those who would complain about its presence. Prior to The American Legion, those asserting mere offense at the public display of a cross, Star of David, or Ten Commandments display only need to complain. Cities, counties, and schools were then forced to defend an uphill battle to keep the monument, symbol, or practice.

Not anymore. Now, those despising the presence of any “religiously expressive” display bear the burden of proof. They must now demonstrate precisely how the “monument, symbol, or practice” violates the First Amendment. In light of the court’s “strong presumption of constitutionality” for displays, in keeping with the history and tradition of our country, that will often be almost impossible.

Onoda may have had an excuse. He was not in direct contact with headquarters and, with respect to any leaflets he saw detailing the end of the war, he chalked them up to propaganda. But twenty-first century Americans — like officials in New Philadelphia — have instant access to information, including decisions by the Supreme Court of the United States.

The City of New Philadelphia and Welty Middle School should reverse course. Now that they know that the war on religious symbols — like a display of a 92-year old plaque featuring the Ten Commandments — is over, continuing to remove such displays can only communicate only one thing to the students and the community at-large: Religion has no place in public.

That’s the wrong message. But, as the Supreme Court has now explained, that war is over.